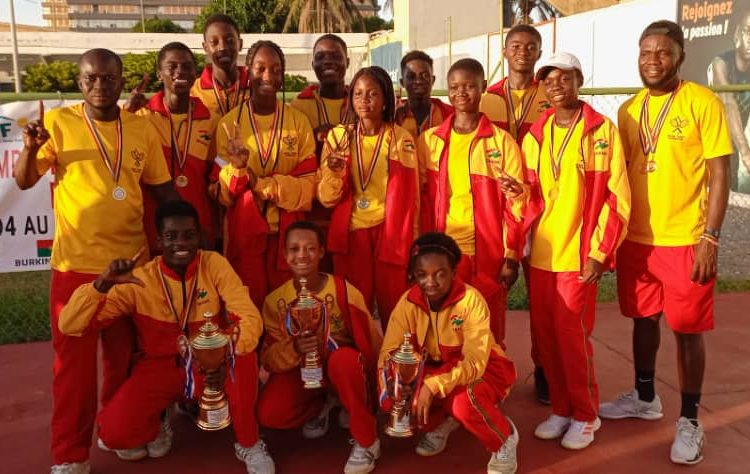 SWAG Tennis player of the year Naa Shika McKorley lived up to the billing as she powered the 16 under girls team to the silver medal at the African Junior Championship (AJC) West and Central Africa Division held in Togo.

Team Ghana made up of Sisu Tomegah, Tracy Appiah and Naa Shika McKorley put up a splendid performance in the International Tennis Federation (ITF) right from the start of the championship.

The young exciting players were faced with the challenge of having to play against pre-tournament favourites Nigeria but the twinkle twinkle little stars made a strong case for the development of Tennis at the basic level when they brushed aside the challenge from the Nigerians beating them by three sets to zero (3-0).

Naa Shika, Ghana’s lead player in the 16 under had a tough test in the start of the competition coming up against Nigeria’s brightest prospect Ogunjabi success in the singles. The Nigerian youngster beat Naa Shika in the opening set 6-2 but the SWAG Tennis player of the year recovered from a set down as she put up a spectacular performance winning the next two sets 7-5, 6-3 to record a 2-1 victory over the Nigerian to wrap up victory for Ghana.

The Ghanaian contingent were too much for the Nigerians to handle as they confirmed their supremacy over the west African nation in the doubles where Naa Shika McKorley and Sisu Tormegah combined to beat the Nigerians in two straight sets 6-4, 6-4.

The ladies lost to Togo in the final and fell short of the gold medal finishing second to the host country.

Reacting to Ghana’s performance at the AJC Championship coach of the Team Bernard Ashitey Armah praised Naa Shika and her colleagues for the splendid performance. He pleaded with authorities for support for the young ladies whom he believes could play to the highest levels of the sport given the right guidance and investment.

Naa Shika McKorley was full of praise for her teammates Sisu Tomegah and Tracy Ampah for their camaraderie and good team spirit. According to her, what did the magic for the team apart from the individual quality was the cohesion and support for each other.
Naa looks forward to playing in the 2022 FED Cup after her debut appearance in Lithuania last year.