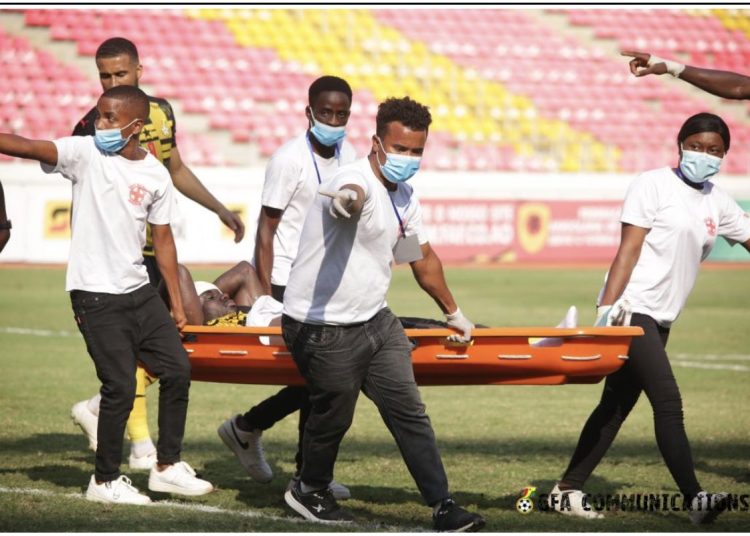 Ghana defender Jonathan Mensah has been stabilized after a head injury forced him out of their 2023 Africa Cup of Nations (Afcon) qualifying Group E clash with the Central African Republic (CAR) Sunday afternoon.

The Black Stars played out a 1-1 draw in the said match at Estádio 11 de Novembro in Angola.

But around the 55th-minute mark, Mensah – who was chasing a goal – came off worse in a nasty clash of heads with a defender of the hosts.

Medical personnel rushed onto the field to treat the Columbus Crew captain for about five minutes before helping him off the field on a stretcher and into an ambulance for further care at the hospital.

Hours later, the Ghana Football Association (GFA) issued an update that “Jonathan Mensah is in a stable condition and responding to treatment at Clinica Girasol – a private hospital in Luanda – Angola.”

“The defender suffered a headbutt from an opponent resulting in a concussion. He was given emergency treatment on the pitch before being rushed to the hospital for further treatment.

“CT Scans confirmed normal findings but would have to spend the night at the hospital for further assessment and evaluation.

“We would like to call on Ghanaians, friends and family to remain calm as the Black Stars medical team works around the clock to get him back on his feet,” the GFA update added.

Jonathan Mensah will likely be excused from the Black Stars’ trip to Japan for matches in the 2022 Kirin Cup Soccer tournament on June 10 and 14.