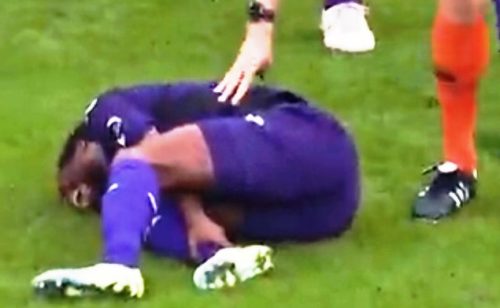 In the past round of games in the Belgian Jupiler Pro League, Ghanaian midfielders Mubarak Wakaso and Majeed Ashimeru faced off in Anderlecht’s clash with KAS Eupen.

The matchup produced six goals with Anderlecht securing a 4-2 win over Eupen; the win is Anderlecht’s sixth of the season and places the team 10th in the 18 team league standings while Eupen ranks 15th.

Ashimeru played out the entire duration of the game and registered his second assist of the season by laying on a pass for Anouar Ait El-Hadj’s goal in the 87th minute.

On the other hand, veteran midfield enforcer Wakaso played 46 minutes in the contest and was replaced early in the second half by Grenada player Regan Charles-Cook.

Wakaso had been booked earlier in the 17th minute for a hard foul on Ashimeru in the former’s attempt to nick the ball off the latter.

However, 25 year old Ashimeru poked the ball away a shade earlier before Wakaso stomped on the side of Ashimeru’s heel that left him sprawling on the pitch wincing in pain.

But why Wakaso go tackle Ashimeru like this?? World cup dey come u dey tackle ur fellow Ghanaian player like this pic.twitter.com/8bRoLQV2sx

Former Red Bull Salzburg player Ashimeru recovered from the hard knock to see out the game.

Wakaso has received four yellow cards in seven league games and got sent off after receiving two yellow cards in a game against VV Saint-Truiden on October 2 this season.

Women’s U-17: Nigerian and German players swap jerseys and dance together

Women’s U-17: Nigerian and German players swap jerseys and dance together