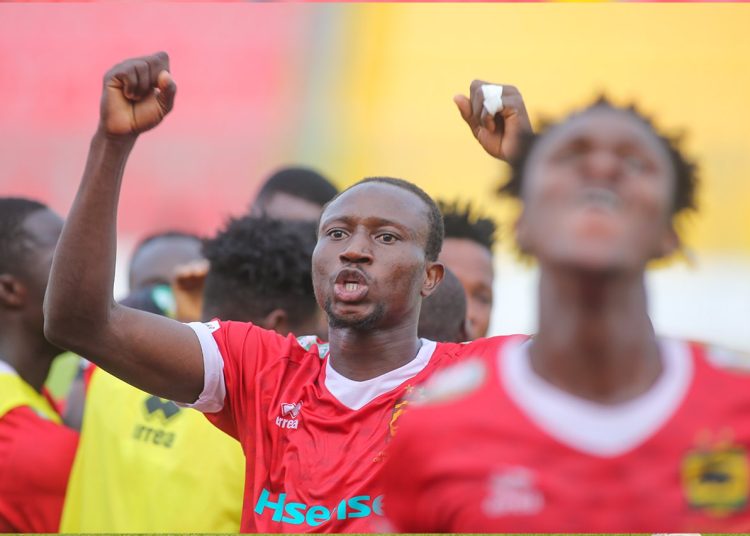 On Sunday, Kumasi Asante Kotoko came from behind to beat Samartex 2-1 at the Baba Yara Stadium.

Kotoko returned to winning ways following their 2-0 defeat to Bechem United in an outstanding Matchday 4 encounter in midweek.

The visitors took the lead four minutes after the 2nd half began but were unable to hold on to the lead as the Porcupine Warriors scored twice in the final eight minutes of the game to secure all 3 points.

Defender Nicholas Mensah equalised for Kotoko in the 78th minute before Augustine Agyapong won the game for the hosts.

The win moves Asante Kotoko to third on the league log after five games played.

Elsewhere, Aduana Stars moved back on top of the pack after securing a 1-0 win over Legon Cities in Dormaa.

Isaac Mintah scored the only goal of the game to give the host maximum points.

Aduana Stars are yet to lose a game this season in the betPawa Premier League.

In the other games, Karela United beat Bechem United at home by a goal, while Real Tamale United pulled a surprise 2-1 win over Berekum Chelsea to move out of the relegation zone.

In Saturday’s games: Accra Hearts of Oak recorded their 2nd successive win of the season after beating Kotoku Royals 1-0 at the Cape Coast Stadium.

Daniel Afriyie Barnieh scored the game’s only goal via a penalty to give Hearts all 3 points, moving them to 6th place on the league log.

At the Accra Sports Stadium, Accra Lions picked up their fourth successive win when they beat newbies Nsoatreman FC 2-0.

Daniel Awuni’s early goal and an own goal from Richard Akrofi, gave maximum points to Accra Lions who are 2nd on the league log with 12 points.

In Friday’s game, Dreams FC and Tamale City played out a goalless draw at the Theatre of Dreams in Dawu.

On Monday, Accra Great Olympics will host Medeama SC at the Accra Sports Stadium in the last game of Matchweek 5.