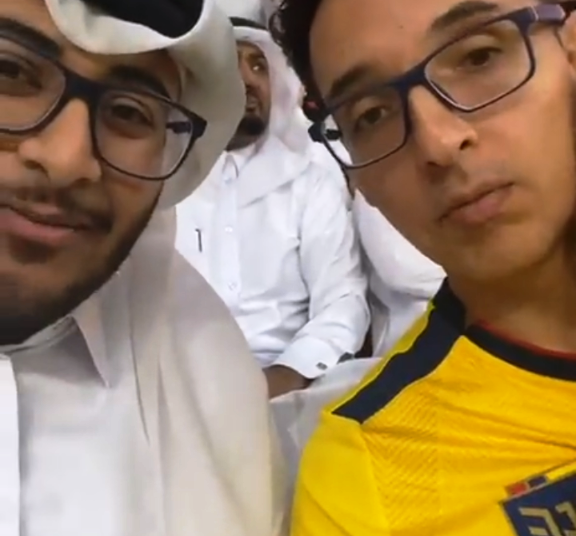 Two fans involved in an awkward exchange that was captured in a viral video during the opening game of the 2022 FIFA World Cup in Qatar looked to have made peace.

An Ecuadorian fan reportedly known as Peter was captured gesticulating towards some Qatari fans after an Enner Valencia goal for Ecuador was ruled out for offside.

Peter gesticulated by rubbing his thumb against his fingers intimating the referee had been bribed by host nation Qatar.

The Ecuadorian fan’s action got a Qatari fan upset and the latter was caught on camera telling Peter to “shut up and sit down”.

However, in the aftermath of the game, the men involved in the brief spat exchanged pleasantries and looked to have put the issue behind them.

The Qatari fan said, “In the end we only here to watch this beautiful game” and the Ecuadorian fan responded stating, “Passion sometimes makes people upset but we come together for sports. Sports brings people together so we are very friendly with each other, I wish Qatar the best and it’s a beautiful World Cup so far”.

Qatar became the first World Cup host nation to lose the opening game after suffering a 0-2 loss to Ecuador with Valencia scoring both goals.

Qatar 2022: England players will take the knee against Iran- Southgate