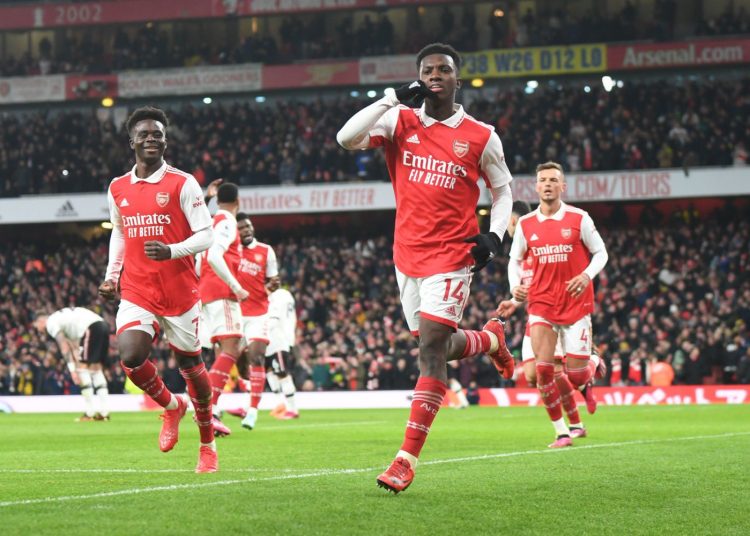 “Without being horrible, what Premier League team does Eddie Nketiah get in? Wolves are bottom, for instance, they’re desperate for a goal and they wouldn’t go and get him.

“For me, it’s really worrying.

This is no disrespect to Nketiah or the other players but Jesus gels everything together.”

This was the extent of Paul Merson’s aversion towards the 23-year-old in his column on the Daily Star.

The regular Sky Sports pundit, who is also an old Gunner himself did not only aver that Arsenal was going to struggle to bang in the goals with Eddie Nketiah trusted to lead the lines in the absence of leading marksman, Gabriel Jesus who is sidelined with a knee injury keeping him out of action until mid-February.

But he also opined that the Gunners were destined to finish outside the top four in the absence of the Brazilian despite being on top the pile going into the World Cup break in November.

From a long-term prospect to benchwarmer, to substitute appearances and to a starter, Eddie has had to bid in his time at Arsenal despite impressing on the few starts and sporadic cameos that had been thrown his way.

A journey that literally began during the dying reign of erstwhile Arsenal Manager, Arsene Wenger in 2017, when he scored the equalizer for the Gunners in an EFL Cup fixture against Norwich at the Emirates with apparently his first touch of the ball and subsequently headed home the winner has been nothing less than that of a roller coaster.

Arsene Wenger and Arsenal legend, Thierry Henry were quick to heap praises on the then-18-year-old tipping him to be the next big thing at the Emirates after that rare performance from someone so young.

After five and half seasons at Arsenal and a half-season loan spell at Leeds United, Eddie is turning heads in the English Premier League putting in eye-catching performances notable among them, a brace against rivals Manchester United in a top-table fixture at the Emirates.

His last-gasp winner in Sunday’s fixture fetched Arsenal the needed three points that restored their five-point lead over chasers Manchester City and his impressive run of form has seen him score in all but two games since the resumption of club football.

Six goals in six starts have catapulted him to joint top scorer with seven goals and clearly doused all fears of the Gunners’ title charge following the short-term injury to Jesus.

With ever-growing concerns and calls for Arteta to sign a proven striker in the winter transfer window, the Spanish gaffer has rather reposed some faith and trust in Eddie despite rumours surfacing of a possible swoop for Dusan Vlahovic or Joao Felix.

I must say, earning Mikel Arteta’s trust in this Arsenal setup must have been quite herculean for the young Englishman after being on the fringes for the majority of the past two seasons where he was down the pecking order below Pierre-Emerick Aubameyang and Alexandre Lacazette.

Despite the departure of the two, this season was set to be no different at the start of the campaign following the arrival of Gabriel Jesus from Manchester City.

Nonetheless, Nketiah has proved the naysayers totally wrong and thus earning the trust and faith of Arteta deservedly.

Eddie’s current explosive form can be attributed to nothing but hard work, perseverance, and undoubtedness.

A couple of weeks ago, Nketiah’s personal trainer Varnavas revealed that the 23-year-old’s impressive form on the pitch can be attributed to a great deal of work in the gym and on the training ground.

Eddie has undergone a huge physical transformation over the last three years making him a tough customer for defenders in the Premier League.

With Gabriel Jesus set to return in a few weeks’ time, Nketiah has really held his own in his absence and thus made a bold claim for the number one spot up front.

A couple of impressive performances from Nketiah could even delay the former Manchester City player’s return to action.

The love and gestures after the memorable victory on Sunday depict the belief the fans and the whole team have in Eddie Nketiah.