Michael Essien ‘proud’ of Black Princesses despite loss to France

The Black Princesses may have lost their opening Group A match against France in the FIFA Women’s U-20 World Cup on Sunday but that did not mean that former Black Stars and Chelsea midfielder, Michael Essien was not pleased with the team’s output.

Ghana lost 4-1 to the home team on Sunday after conceding goals from Helene Fercocq, Emelyne Laurent and Sandy Baltimore.

After the match, Essien, who had visited the team before kick-off, posted a tweet and encouraged the Black Princesses to persevere and that, he was behind them.

I want to tell #BlackPrincesses that I’m proud of you! U gave the match tonight everything. Don’t lose ❤. I Believe IN U👊🏿 @FIFAWWC #U20WWC

Essien is in France to watch the tournament as a special invited guest of FIFA to provide support and motivation for the Ghanaian team. 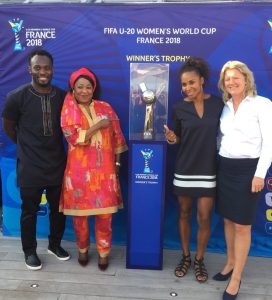 The Black Princesses will face Holland and New Zealand in their subsequent Group A matches on August 8 and 12 respectively.