“Kotoko have bagged a winner in C.K. Akonnor”- Eric Donkor

AshGold player, Eric Donkor, says Asante Kotoko’s decision to appoint C.K. Akonnor is a wise one since the coach has the taste for victory in him.

Akonnor’s latest job was confirmed by Asante Kotoko on Monday who appointed the former Black Stars skipper on a 3-year deal.

Donkor, himself a former Kotoko player, worked briefly with Akonnor at AshGold before football in the country was halted due to the fallout of the Anas Aremeyaw Anas Exposé in June.

He told Citi Sports in an interview on Monday that Akonnor would add a lot to Kotoko because of his drive, focus and the hunger to win.

“I worked under C.K. Akonnor for a month before he left AshGold. I will say that probably Kotoko has seen something good in him and so, they decided to appoint him. Congrats to them. 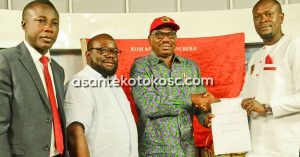 According to Asante Kotoko’s website, Akonnor has revealed that he will bring a style of football known as ‘Agroball’; a combination of entertainment and goals to the club.