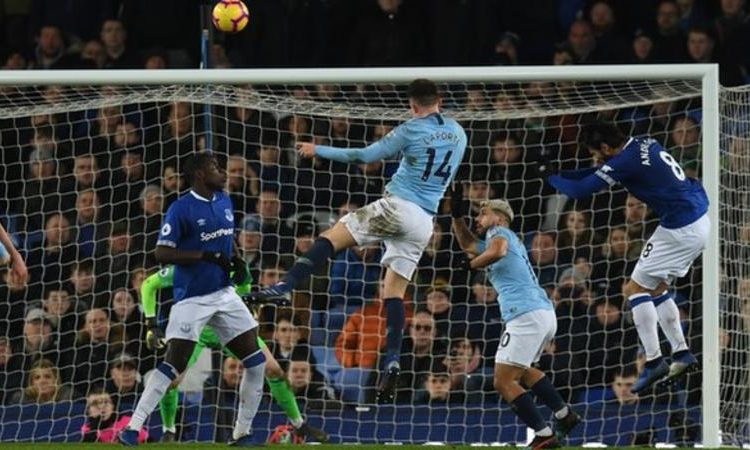 Pep Guardiola says Manchester City have learned “to never give up” after returning to the top of the table for the first time since 16 December with a 2-0 win at Everton.

A week ago City were five points adrift of Liverpool but took full advantage after Jurgen Klopp’s side could only manage back-to-back draws, moving ahead of the Reds on goal difference albeit having played one game more.

“A few days ago we could have been seven points behind. Now we are top of the league. That is the best advice, the lesson is never give up,” said Guardiola.

“That is a lesson for all athletes. Try to win the games, because life can change immediately.”

It was far from a vintage display by City, who instead had to show their battling qualities to secure the points and regain the initiative in the title race.

Attention will now switch back to Liverpool, who can return to the summit with victory against Bournemouth on Saturday, 24 hours before City host Chelsea at Etihad Stadium.

Everton stay ninth after suffering a fourth defeat in five Premier League games at Goodison Park, though they should take some encouragement from a resilient display that was a notable improvement on their performances in recent weeks.

‘The players have shown incredible desire’ – what the managers said

Manchester City manager Pep Guardiola: “We come from champions and we are in a situation where we could have given up but it didn’t happen.

“We gave an incredible game against Liverpool. These players have shown incredible desire and performances for the last two years. How could I question them?

“We have played one more game. but it’s the best we can do. The reality is one month ago we could have been 10 points behind when we played Liverpool.”

Everton manager Marco Silva: “There are positives but again we didn’t take the points we want and we are working to achieve. At the moment bad things come too easy, we concede after 47 and 97 minutes. Just working like we did tonight, things will change for us, I am really positive. The team showed what we must do.

“The fans are so good, at the end of the match what they did for our players, I don’t have doubts. We are all together and we will give them what they want and what they deserve.

“Everything was different compared to Wolves, I have to be honest. This has to be our image as a team. We must be consistent, it is an obligation for us. A desire to win, an aggression – it is what we have to do every time against every team.

“You have to respect every team. Be aggressive at set-pieces. We were in the zone we must be in, we moved a little bit, it was a good delivery and header but we have to challenge. I have to speak with my players about this, it is not normal.

“I cannot understand why we must play tonight, it is very tough for us.”