‘I was destined to be a world champion’ – Richard Commey 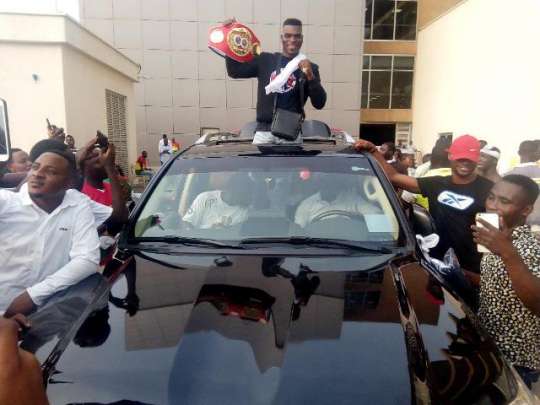 Newly crowned International Boxing Federation (IBF) Lightweight world champion, Richard Oblitey Commey, has said, he was not surprised by his latest landmark achievement, because he was “destined” to be a world champion.

Commey, 31, received a red carpet treatment on his return to his homeland on Thursday, February 14, after he won a world title for the first time in his career and became the ninth Ghanaian world champion.

Addressing the media at his arrival, Commey said he was a natural winner who was in the waiting for a bigger glory.

“For me winning a world title is no doubt, because I have won national titles to intercontinental so what was on left is this (world title). Winning this feels like it was my destiny to win a world champion. And now I’m a world champion and I’m happy. And it means everything for me because it is the dream of every boxer to be a world champion,” he said.

The new champion, however, noted that, he worked hard for the opportunity and his hard work paid off for him.

He said, he would take the moment to enjoy the title as he look forward to an even better future where he would unify a lot of the world titles that comes his way.

Commey noted that, he would definitely welcome a possible clash with World Boxing Association (WBA) and World Boxing Organisation (WBO) Lightweight champion, Vasyl Lomachenko, but wants to ensure that his injured right hand from his last bout, heals completely before deciding on his next move.

Commey destroyed Russia’s Isa Chaniev in two rounds to win by a technical knockout at the Ford Centre in Frisco, Texas, on February 2, 2019. The new champion attributed his emphatic victory to having the best of training under new trainer, Andre Rozier.