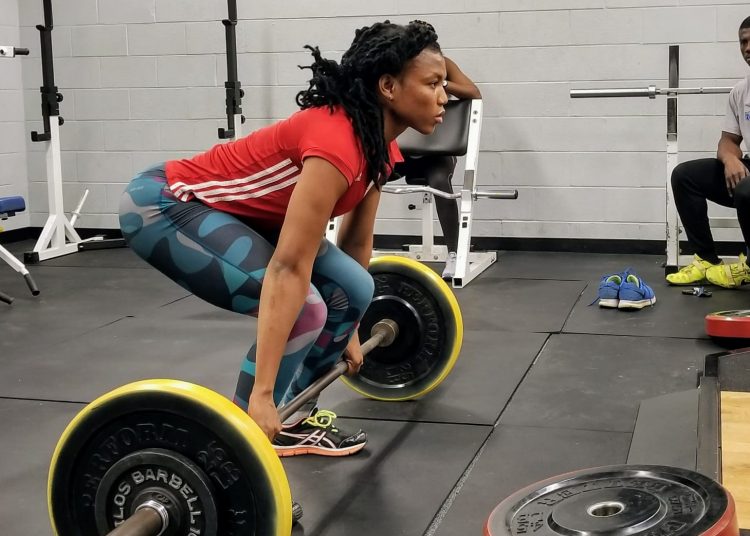 Promising Ghanaian sprinter, Hor Halutie, is adjusting well to new training methods, diet and weather, as she continues her developing to becoming a sprint star.

The Commonwealth Games women’s 100m finalist, who turns 20 in April, has been in the United States of America since November 2018, where she’s been training under the watchful eyes of former national athlete, Prof. Andrew Owusu and Dean Hayes, athletics coach at the Middle Tennessee State University.

Her training camp was facilitated by the Ghana Athletics Association with support from Just Because Fitness.

With the All Africa Games and the IAAF World Athletics Championship to come later this year, a lot is expected of the former T.I. Ahmadiyya SHS graduate.

Beyond the busy training schedules, Hor has also been enrolled in English classes, paid for by Just Because Fitness, aimed at improving her communication skills and brand marketability in the future.

Fentuo: What training regimes has she focused on since she arrived and what processes went into designing those?

Andrew Owusu: Before designing the initial parts of her training program, we first conducted a few assessments to help us prioritize areas for improvement. However, prioritization of development processes/activities was not based solely on assessment results. Rather, we considered short-term (2-3 months), medium-term (season), and long-term (2-5 years) goals. Both athletic and personal (Hor’s non-athletic) goals were taken into consideration.

Post assessment, decision was made to focus on improvement of her running mechanics and, strength and conditioning as a short-term goal.  This included; general conditioning but with an emphasis on improving isolated movement skills that are most relevant to overall sprint mechanics. However, several weeks were spent teaching her Olympic lift techniques prior to shifting emphasis to “strength” building in the weight room. The initial part of her strength training focused heavily on her core since core strength is a prerequisite for good running posture.

Fentuo: Warm up drills has become a crucial aspect of sprinters lives. Is that something that’s being worked on?

Andrew Owusu: Yes. Her warm-up routines were customized and pegged to specific training session focus. In addition, she has beefed up her repertoire of general and event-specific warm-up drills/activities. This includes adding new drills to her existing bank to help improve flexibility, coordination, posture, application of force into ground and stride pattern.

For each drill, including those she already knew, she’s learned/learning its applicability to either general running mechanics or for specific phases of her event. She has also learned what to focus on for each of her drills including key points of reference as her limbs move through space.

Fentuo: I will ask about how she’s adapting to all of these new training methods but what specific changes have you seen so far?

Andrew Owusu: Hor’s arms in sprint mode used to have a noticeable “drumming” pattern to arm movement because of an exaggerated initial forward push of her hand before swinging arm down and back. The “drumming” action is no longer present; at least not when she puts her mind to it. Fixing the latter problem involved re-framing her understanding of the arm movement and emphasis during sprinting. Also, she had a noticeable long “heel recovery” when sprinting; apex of heel movement from the back was at times as high as mid-way of buttocks as opposed to directly under butt. Other areas of significant change include starting blocks adjustment and form out of blocks.

Fentuo: You’ve spoken a lot about mechanics. What about things like strength conditioning, speed and endurance training?

Andrew Owusu: The current phase of training focuses on sprint endurance actually. She’s spent about 3-4 weeks working out with 400m runners as she continues to focus on running mechanics. In the weight room, she has fully transitioned to building strength and learning to apply ample force as part of key dynamic movements.

Hor’s strength and conditioning is handled by John Ampomah; a USTAF certified coach and Ghana’s national record holder in javelin so she’s getting very professional help with that.

We will be transitioning to a focus on speed work (includes speed and strength endurance) phase in early March. The latter phase will also coincide with greater emphasis on plyometrics to help with force application and overall development of power i.e., faster application of force.

Fentuo: That’s a lot of things to work on within such a short time. With a new environment and all, how is she adapting to all of this?

Andrew Owusu: I think Hor has adapted very well and is a quick learner though it has not been easy to change some of her ingrained movement patterns that needed improvement. However, she has made significant progress through each training phase. On the non-training front, the transition from autumn to winter was bit rough i.e., cold weather. However, she seems to have fully settled in, and to my surprise, has adjusted very well to the weather.

By the way she has also enrolled herself in an English as a second language (ESL) program and attends class twice a week; lots of homework in between.

Fentuo:  What has been the most challenging aspects of her training?

Andrew Owusu: There’s been quite a number of challenging situations with Hor. First; unlearning certain movement patterns to improve overall running mechanics. The latter is always a significant challenge for athletes since at the core, we are talking about changing neurologic firing patterns or as some will say, trying to create new firing pathways in the brain.

Second; trying to understand the physics that underpin certain key movement principles and their relevance to sprinting/running has also been challenging.

Third; realizing that she is getting stronger, but it takes time to learn how to maximize or take full advantage of strength during power movements; power can be crudely defined as a function of strength and speed. That is, how fast one can move a given amount of force (strength) = power.

Fentuo: What are your expectations of her in 2019 in view of competitions and progress?

Andrew Owusu: Just like everybody, including Hor herself, we are anxious to see how the progress made so far in training translates into better performance. The plan is for her to start her 2019 season in late March; about 4 weeks from now. The first few competitions will be used to assess how well she puts together the various phases of her race.

She has not raced in over a year and no amount of training can replicate competition conditions. We expect her to compete in about 5 or so competitions before heading back to Ghana. During this time, she will also be on relay duty as the ladies 4X100m seeks to secure a qualification mark for the 2019 IAAF World Championships; also prepare for the 2019 All-Africa Games where the ladies’ team should be in contention for gold.