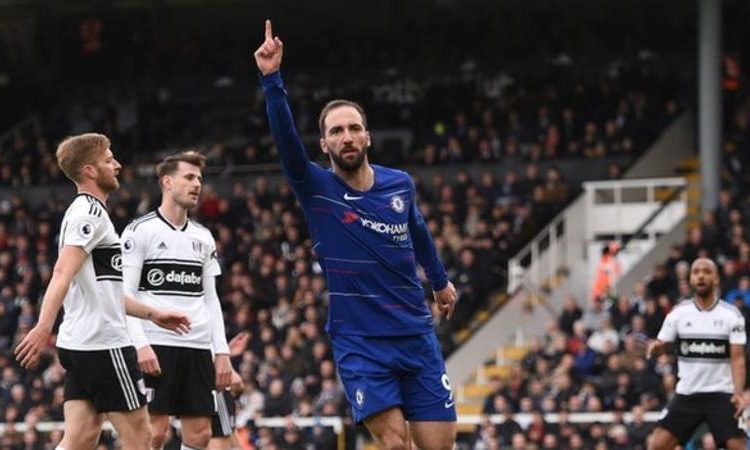 Gonzalo Higuain set Chelsea on their way to a first Premier League away win of 2019 with a high-quality finish from Cesar Azpilicueta’s cross.

Fulham, who sacked Claudio Ranieri on Thursday, produced a spirited display and equalised through Calum Chambers from a corner, awarded after recalled Chelsea keeper Kepa Arrizabalaga’s exceptional save had kept out Aleksandar Mitrovic’s volley.

They were level for only four minutes, Jorginho’s well placed finish from 20 yards leaving Chelsea only two points adrift of fourth spot.

Ryan Sessegnon thought he had equalised in the closing moments but the 18-year-old’s effort was ruled out for offside.

Better from Fulham but relegation looms
Despite a 20th league defeat of the season, Fulham fans applauded the home side off the pitch at the end after a much improved performance.

Parker demanded a response in his first game and he got one, but time is running out for a team who have looked out of their depth most of the season and have now lost eight of their past nine league games.

Relegation is looming for Fulham, who are 10 points from safety with nine games remaining, including home matches with Liverpool and Manchester City.

It might have been a different story but for Arrizabalaga.

The Chelsea keeper was kept busy with saves from Tom Cairney and Joe Bryan, but his acrobatic first-half stop to deny Mitrovic, with the score 1-0 to Chelsea, was outstanding.

It resulted in a corner from which Chambers, who was left totally unmarked, equalised. But Chelsea were soon level again.

In a frantic ending, Serbia forward Mitrovic could have equalised but headed straight at Arrizabalaga before Sessegnon put the ball in the back of the net only for a tight offside call to go against him.

Parker has described his new role as an “audition” and he certainly got a reaction from his players. Now he has to find a way of turning decent performances into points.

Kepa back with a bang
Seven days ago Chelsea were portrayed as a club in meltdown after goalkeeper Arrizabalaga refused to be substituted during the Carabao Cup final defeat by Manchester City.

The Spanish keeper was dropped for the midweek win against Tottenham but was back in the team at Fulham as Chelsea made it back-to-back wins in the league.

With the game goalless, Arrizabalaga was lucky to escape after dropping the ball at the feet of Ryan Babel on the edge of the six-yard area.

But he made up for his mistake with a wonderful save to deny Mitrovic and was badly let down by his defenders for Chambers’ goal.

Chelsea were far from their fluent best and they wasted chances to put the game out of sight before Fulham’s late rally.

Towards the end of the first half, Higuain, who now has three goals in five league games for the club, missed a great opportunity to make it 3-1, before Fulham keeper Sergio Rico produced a sublime one-handed save to keep out the Argentine.

With Chelsea having a game in hand over the teams above them, the race to finish in a Champions League spot could yet go to the final weekend of the season.