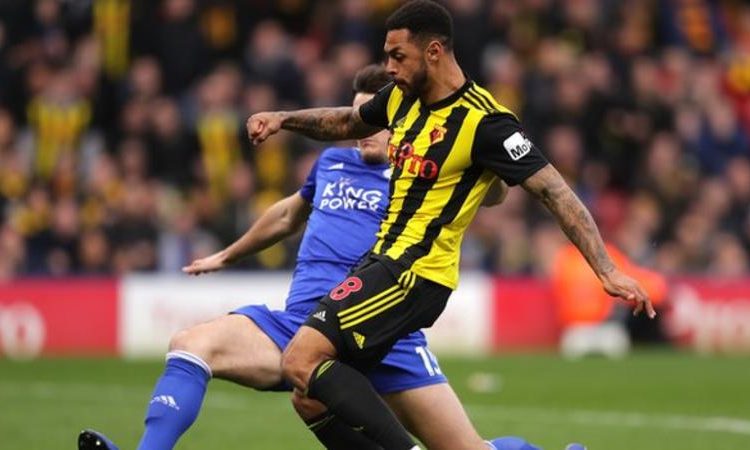 Troy Deeney insists there will be no Watford “meltdown” this season after the Hornets continued their impressive campaign with a late victory over Leicester in Brendan Rodgers’ first game in charge of the Foxes.

Deeney had given Watford an early lead, heading Gerard Deulofeu’s cross past Schmeichel.

Jamie Vardy appeared to have earned the visitors a point with a low finish from Youri Tielemans’ pass, but Gray’s goal clinched the win for the Hornets.

Watford won only one of their last nine league fixtures last season and suffered six consecutive defeats at the end of the 2016-17 campaign, but Deeney is confident Javi Gracia’s side can maintain their push for a Europa League spot.

“We aren’t happy to win just one and lose three,” he said. “We want to make sure we finish as high as we can. The media have said after January there will be a Watford meltdown.

“Egos are out of the window, everyone is trying. Look at the depth of the squad – everyone is willing to fight.”

Watford stay in eighth place due to their inferior goal difference to Wolves, while Leicester remain 11th following a seventh defeat in 10 league games.

Positives for Rodgers?
After watching Leicester’s 2-1 win over Brighton from the stands on Tuesday, Rodgers promised his new charges that there are “special things on the horizon” at the club.

Rodgers shares his predecessor Claude Puel’s penchant for promoting young talent, but it is his reputation for attractive, attacking football that has got Foxes fans dreaming of a brighter future.

The travelling supporters had little to shout about in the early stages though, as Watford took the game to their opponents from the outset.

Schmeichel had to be on his toes to deny Adrian Mariappa after just three minutes, before Wes Morgan – named alongside Jonny Evans and Harry Maguire in City’s back three – blocked Deulofeu’s shot on the follow-up.

Rodgers will be disappointed with his team’s defending for Deeney’s opener, although replays suggested that Watford’s top scorer was marginally offside from Deulofeu’s delivery.

The Foxes improved as the game wore on, however, registering 14 attempts compared to Watford’s six over the course of the 90 minutes.

Clear-cut opportunities were few and far between though until Vardy sprinted onto Tielemans’ excellent through-ball and finished past Foster for his 10th goal of the campaign.

Watford grind out win
If the Watford players’ confidence was dented by the 5-0 defeat at Liverpool in midweek, they did not show it during an enterprising start to the contest.

Gracia’s side could have taken the lead before Deeney’s opener, but Mariappa and Deulofeu were denied by Schmeichel and Morgan respectively.

Deeney and Deulofeu were excellent in the 5-1 win at Cardiff a week last Friday, and it was no surprise to see the duo combine for Watford’s first goal.

Abdoulaye Doucoure tested Schmeichel’s reflexes in the second half with a powerful effort from outside the box, but the Dane had precious little else to do as Leicester’s three-man defence of Morgan, Evans and Maguire stood firm.

Gray scored the only goal in Watford’s previous home game against Everton, and the 27-year-old was on target for the Hornets once more with a confident finish that sparked wild celebrations among the home supporters.

This could prove to be an important three points for Gracia’s side, who face both Manchester clubs away from home in their next two league outings.

‘I thought our play was excellent’ – what the managers said
Watford head coach Javi Gracia: “In the first half we played much better than the second. We created chances to do it. In the second we lost possession and they had some chances. My players played really well and we deserved a good result.

“Andre Gray played some minutes against Everton and has scored important goals. We know he is always ready. I know all my players deserve more time but it is not easy to choose 11. What is more important for me is I know the players I choose are always ready.

“We are enjoying the season. It is an important amount of points for us but I can feel the players want more and more. Who knows what can happen in the future.”

Leicester manager Brendan Rodgers: “I thought after going behind so early we regrouped and had some good moments. At half-time we reinforced about some issues around the speed of our game but I thought the play was excellent.

“It looked like only one team would win the game. When we had an opportunity it was a great pass from Youri [Tielemans] and Jamie [Vardy] does what he does. You felt Watford were getting deeper and the opportunities were coming for us.

“We started to get into really good areas and the goal at the end is a case of managing the game. It is something that will get better as we work together. I was pleased with the spirit of the team.”