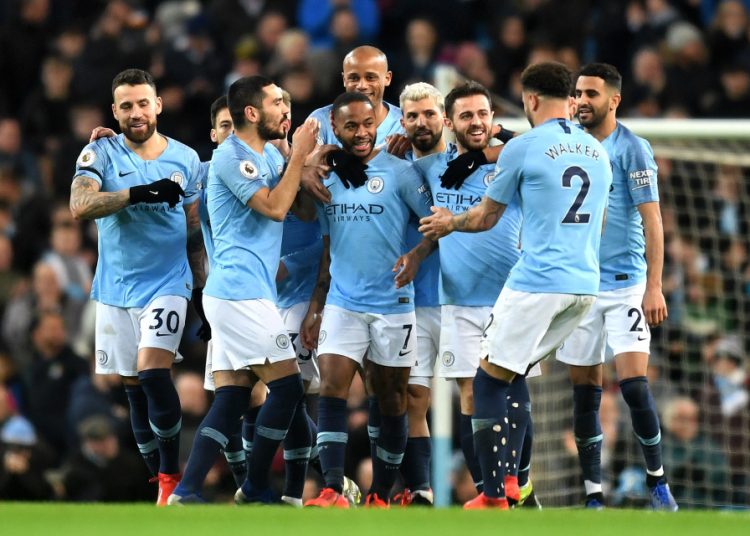 Raheem Sterling scored a 13-minute hat-trick as Manchester City beat Watford 3-1 to open up a four-point gap at the top of the Premier League.

There was an element of controversy over the winger’s opener but his speedy treble turned a frustrating game decisively in City’s favour early in the second half.

Gerard Deulofeu did pull one back for the visitors at the Etihad Stadium but City held on to turn up the heat on closest challengers Liverpool ahead of their game against Burnley on Sunday.

Yet after a week of off-field turmoil for City, Pep Guardiola’s men found a way by once again showing that on the field they remain in good health.

When they hosted Liverpool on January 3, City could have fallen 10 points behind at the top but now they are firmly back in control of their destiny.

It took time for them to find a way through as Watford, after making seven changes, sat deep. For a third league game in succession, City were involved in a goalless first half.

David Silva had an early opportunity when Riyad Mahrez delivered an inviting cross from the right but could not make firm contact with his header.

Oleksandr Zinchenko drove an effort across goal that Sergio Aguero could not reach before the Argentinian spurned a fine chance when he headed wide from a Bernardo Silva cross.

Mahrez curled an effort over just before the break but any fears City might be facing a long grind were dispelled in the opening minutes of the second half.

There was plenty of controversy over Sterling’s opener that was awarded after a lengthy consultation between referee Paul Tierney and his assistant Eddie Smart.

Initially Sterling seemed well offside as he ran on to a ball from Aguero, who was deemed to have controlled with his chest despite appeals for handball.

But an attempted intervention from Daryl Janmaat proved critical, with the ball rebounding off the defender and then Sterling before looping into the net.

Watford’s players reacted angrily when the officials eventually decided the goal should stand and their minds may have been elsewhere when Sterling doubled his tally moments later.

This time there was no debate as the England forward simply tapped in from a low Mahrez cross.

The visitors’ resistance was broken and Sterling completed his treble just before the hour as he jinked through the area from a Silva through ball and blasted past Ben Foster.

Sterling was replaced by Leroy Sane soon after but Watford also made changes and the twin introductions of Troy Deeney and Deulofeu – who were presumably rested with next week’s FA Cup quarter-finals in mind – made a difference.

Within seconds Deeney played in Deulofeu and the Spaniard finished confidently.

It was too little too late, though, and City, who had further chances through Aguero and Gabriel Jesus, eased to victory.