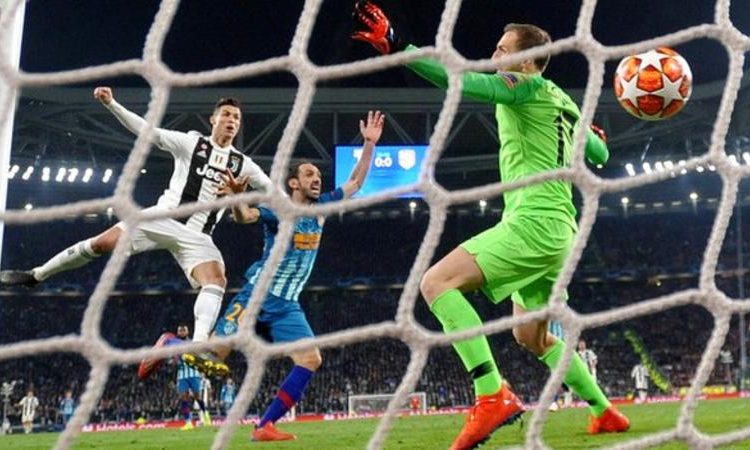 Cristiano Ronaldo scored his 122nd goal in the Champions League in the first half before adding two more after the break (Image credit: Reuters)

Cristiano Ronaldo once again underlined his worth in Europe’s elite competition as his hat-trick overturned a 2-0 first-leg deficit against Atletico Madrid to send Juventus into the Champions League last eight.

The fans of the Turin club had yet to see their £99m summer signing produce the sort of displays in Europe that helped Real Madrid to four Champions League titles in five seasons, but that all changed on a thrilling night inside the Juventus Stadium.

Having brought the tie level with two typical headers, Ronaldo capped off another remarkable performance and entered Juventus folklore when he smashed in the tie-winner from the spot four minutes from time, after Federico Bernardeschi had been fouled in the area.

It was his 124th goal in the Champions League and eighth hat-trick in the competition. The home fans erupted on the final whistle and the players rushed to Ronaldo.

“It was meant to be a special night and it was, not just for my goals but for the attitude we showed,” the 34-year-old said.

“That is the sort of mentality you need to win the Champions League.

“This was why Juventus brought me here. To help do things that they have never done before.”

Atletico’s defeat means they miss out on the chance to play the final at their own Wanda Metropolitano stadium on 1 June.

The draw for the last eight will take place on Friday at 11:00 GMT.

Juve coach Massimiliano Allegri set up his team to play a high line and put pressure on their Spanish opponents from the first whistle, with the onus on full-backs Leonardo Spinazzola and Joao Cancelo to advance forward as often as possible.

The home side thought that tactic had paid off early when captain Giorgio Chiellini poked home in the fourth minute. However, following a VAR review it was declared that Ronaldo had fouled Jan Oblak in the build-up.

There was no need to refer to VAR when Juve next had the ball in the net through Ronaldo’s first header past the Slovenian keeper.

It gave the home fans, who were handed 30,000 flags to wave, hope that their side could produce one of the great Champions League fightbacks in recent times.

That became more likely soon after the restart when Ronaldo headed in his second.

It was Cancelo who supplied the cross on this occasion. Oblak appeared to claw his effort off the line before goal-line technology alerted referee Bjorn Kuipers that the goal was good by a matter of inches.

For the winner, former Fiorentina player Bernardeschi was pushed inside the area by his tracker Angel Correa after making a 50-yard run – the Juve crowd held their breath for a second before the Dutch official pointed to the spot.

It was left for Ronaldo to crown a memorable display by himself and his team by firing his spot-kick to the right of Oblak.

Allegri praised his side’s measured approach to the task.

“The players have shown great maturity,” he said.

“There was the risk of having a hysterical match, as if everything had to be done in 10 minutes.”

It was perhaps a surprise that Diego Simeone’s Atletico were overwhelmed so easily.

Since the start of the 2013-14 campaign, they have kept more clean sheets than any other team in the Champions League (34) but on Tuesday La Liga’s second-placed side looked likely to concede whenever Juve flung the ball in from the wings.

It was expected they would concede the lion’s share of possession, but on the rare occasions they did have the ball the three-time finalists were both pedestrian and sloppy.

One moment of carelessness led to the opening goal when Alvaro Morata, who started alongside Antoine Griezmann up front, misplaced a header which allowed Emre Can to start the Juve attack.

Morata also had his side’s best effort when he headed over from six yards.

Manager Simeone said: “I don’t think it was our worst performance, nor did I see a lack of character. They simply played better and we have to congratulate them.”