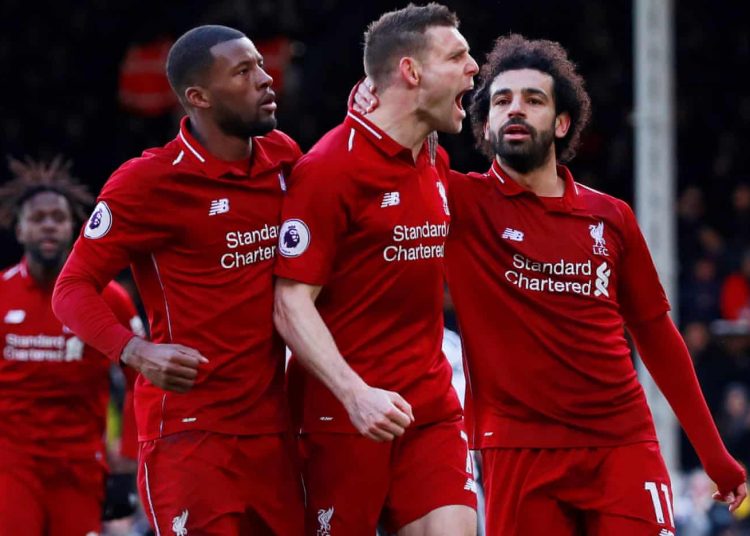 Liverpool returned to the top of the Premier League but needed James Milner’s late penalty to avoid dropping points at Fulham.

Leading through Sadio Mane’s 11th goal in as many games in all competitions, the visitors failed to put a limited Fulham side away, allowing the hosts back into the game.

A dire defensive mix-up between defender Virgil van Dijk and goalkeeper Alisson gifted Ryan Babel an equaliser against his former club on 74 minutes.

But Fulham keeper Sergio Rico then made an equally poor blunder, dropping Mohammed Salah’s curling shot and fouling Mane as the Senegal forward went for the ball.

Substitute Milner calmly hit his penalty down the middle as Rico dived right, sending a relieved Liverpool back to the top for the first time since 1 March.

Jurgen Klopp’s side are now two points ahead of Manchester City, who have a game in hand.

Relief for the Reds

With Fulham carrying little threat and unable to keep the ball midfield in the first half, this became a test of whether Liverpool could focus and avoid complacency.

They were far from their slick and incisive best – Firmino was poor aside from his assist for Mane’s goal and frequently misplaced passes, Adam Lallana was anonymous in midfield and Joel Matip headed well wide when free at a corner.

While Liverpool’s defenders were alert enough to cut off Fulham’s sporadic forays forward, it seemed that one-goal lead would be enough. But then their concentration lapsed.

Milner sliced a clearance with his first touch after coming on and it dropped between Van Dijk and Alisson. The keeper failed to come when beckoned, the Dutch defender’s header back was weak and Babel was able to sneak in, the ball deflecting up off him past Alisson for the simplest tap-in.

It would have been an embarrassing way to cede ground in the title race but Liverpool’s fervency to make amends at the other end ultimately induced a mistake from Rico to help salvage a vital victory.

For Fulham, they defended well against Liverpool’s impressive front three, with Tim Ream and Joe Bryan making key interceptions to deny Salah, and grew in confidence during a brighter spell in the second half.

But still 13 points from safety with seven games to go and champions Manchester City next up, pride and positivity is perhaps all they look to be playing for now.