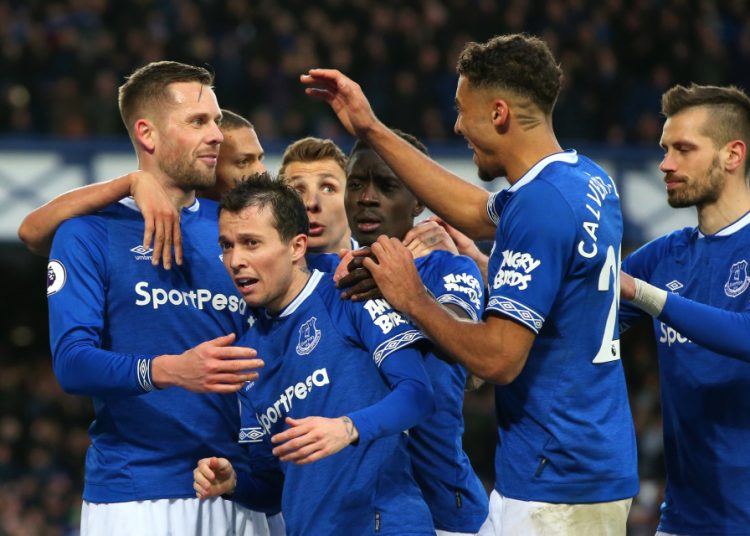 Maurizio Sarri cut an exasperated figure on Merseyside as he watched his Chelsea side succumb to a 2-0 defeat against Everton.

The Toffees produced one of their best performances of the season against the west Londoners, scoring twice in the second half through Richarlison and Gylfi Sigurdsson.

In truth, Chelsea could have at least had a consolation had it not been for the inspired form of Jordan Pickford.

After a week of scrutiny following his mistakes at Newcastle, the England international kept a clean sheet and was jubilant as the final whistle was met with jubilant celebrations at Goodison Park.

Eden Hazard tested Pickford early on before crashing a deflected effort against a post.

Michael Keane then cleared the ball off the line from Gonzalo Higuain as Chelsea continued to dominate.

The Toffees’ only real chance came when Dominic Calvert-Lewin headed over from Gylfi Sigurdsson’s free-kick, but they came out firing in the second half.

Kepa Arrizabalaga produced a stunning save to tip Andre Gomes’ left-footed curling effort over the crossbar.

Then, the hosts went ahead in the 49th minute when Richarlison nodded in from close range after Kepa parried Calvert-Lewin’s header.

Determined not to be beaten, 25-year-old Pickford made yet another fine stop to deny Higuain as Chelsea pressed for an equaliser.

But it was Everton who doubled their advantage in the 71st minute through Sigurdsson.

After Marcos Alonso tripped Richarlison in the box, the Iceland playmaker saw his penalty saved by Kepa – before tapping in the rebound.

Although Seamus Coleman and Sigurdsson were fantastic for Marco Silva’s men, it was the display of England No.1 Pickford which proved pivotal.

Despite being faced with one of the most potent attacking line ups in Europe, the 25-year-old stood tall to give his colleagues the platform to grab all three points.

A perfect response for those calling for Tom Heaton to be the man between the sticks for the Three Lions during the Euro 2020 qualifiers.