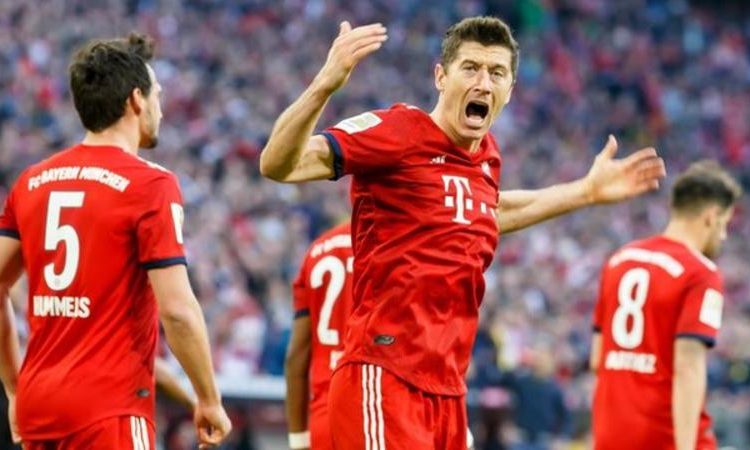 German champions Bayern Munich thrashed title rivals Borussia Dortmund to move back to the top of the Bundesliga with six games remaining.

Dortmund, who were two points clear heading into this match, were shell-shocked following a ruthless first-half display from the hosts.

In a showdown described as the “biggest in Europe this season”,Dortmund’s title hopes suffered a blow and extended their losing streak at the Allianz Arena to five games.

At the start of December, the title race looked to be over with Dortmund nine points clear at the top, but Bayern took advantage of the stuttering form of their rivals to claw back the deficit.

And as if intended as a timely reminder of Bayern’s pedigree, Lewandowski became the second-fastest player to score 200 goals in the German top flight, doing so in 284 games.

His Bayern side are aiming to win a 29th league title and could add the German Cup after reaching the semi-finals with a victory over second-division side Heidenheim.

Over in a flash

Dortmund’s free-flowing football had propelled them to the top of the table with seven games remaining but they were taught a lesson by a Bayern side hungry to retain their title.

There weren’t any initial signs of a collapse – midfielder Mahmoud Dahoud hit the outside of the post within eight minutes as Dortmund looked bright.

But ex-Dortmund centre-back Hummels proved more clinical when his towering header thumped into the back of the net just minutes later.

After the opener, Dortmund struggled to keep pace with their title rivals and eventually the pressure took its toll.

Dan-Axel Zagadou’s clumsy pass fell straight to Lewandowski and the former Dortmund striker lifted the ball over the keeper and slotted it into an open net to double Bayern’s lead.

But Burki’s heroics were short-lived as Javi Martinez pounced on a rebound to fire Bayern into a 3-0 lead within 40 minutes.

Gnabry rubbed further salt into the wounds two minutes later with a pin-point header from Muller’s cross and Lewandowski picked up his second of the night with a tap-in a minute before full-time.

Dortmund’s humiliation was confirmed at half-time but they remain only a point behind in a thrilling title race.

Bayern’s slip-up last week against Freiburg suggests there could still be more twists to come.