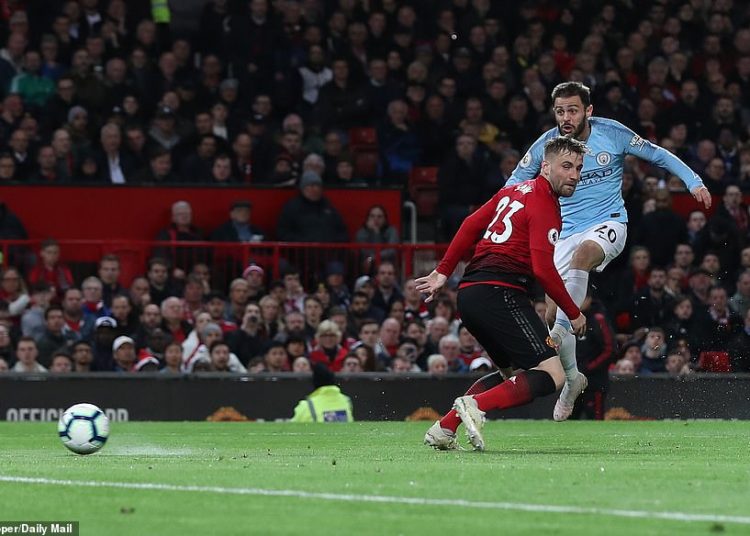 Goals from Bernardo Silva and Leroy Sane gave Manchester City a 2-0 win at Old Trafford to send them back to the top of the Premier League with three games left in the season. Here are some of Citi Sports’ talking points from the tie.

Better but not enough from Man United

If Manchester United’s players had given off such a performance at Everton in the last round, they would have had better reviews from fans and pundits.

Against Man City, one could see the fight, the push, the urge and the drive to get something out of the game. Players showed some hunger and there was some persistence for an end product.

However, all the sweat could not hide a fact that was clear to everyone: Man City just had better players on the day. With the game became more tasking, Pep Guardiola had the likes of Leroy Sane to call on and the German delivered the winning goal.

Man United, on the other hand, fell on Alexis Sanchez and Romelu Lukaku, who have not been at their best at least for this season.

That highlighted the progress made by the two teams and what Man United are up against when there is talk of reviving the old beast.

Ole Gunnar Solksjaer may want more effort and all that but he cannot overlook quality. It is the sole element that makes effort look guided and productive.

We may like them for their fancy football and great tactical work but Pep Guardiola’s Man City are very focused and driven to win another league title and their hunger seems to have grown since they came back from the huge points deficit against Liverpool.

Every game has been played with grit, determination, hunger and intensity and they gave another demonstration at Old Trafford. They kept persisting and when they needed something extra, they had players on the bench.

Pep Guardiola’s celebration encapsulated what their pursuit of the league title meant to them and it is very admirable.

Success can dull a team and can make them complacent. Not this Man City team.

They have desire and they are willing to let go at any time. It makes for a very fascinating end to the season especially now that they are on top of the table.

Man United may have lost to Man City but they could still sneak into the top four but that is highly dependent on results of other teams and what they do for themselves.

They have to face Chelsea, Huddersfield and Cardiff City in their final three games of the season while their rivals, Arsenal and Chelsea have some tricky duels on their list.

It could come down to fine margins such as goal difference and even relying on other results but a mini-war will erupt between Man United, Arsenal and Chelsea and Ole Gunnar Solksjaer’s men could emerge victors.

Our away form may not improve in the second round - Grant