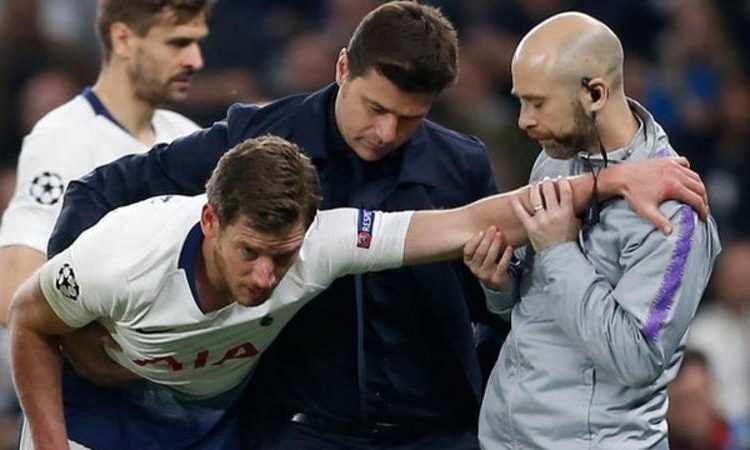 Tottenham’s medical staff followed the correct protocols before allowing Jan Vertonghen back on the pitch after his head injury, says Mauricio Pochettino.

He was treated for five minutes on the pitch and attempted to continue playing but was eventually helped off by medical staff after appearing unwell.

“For me the most important thing is the health of the player,” he added. “In that moment the doctor decides it’s OK. The medical staff are the boss on the decision.”

Referee Antonio Mateu Lahoz had asked for confirmation to allow Vertonghen to return to the pitch but the centre-back was hunched over as he swiftly signalled that he would be unable to continue playing.

No ambulances were called to the stadium and Vertonghen was later seen walking freely through the media zone after the match.

“I wasn’t involved. It was the doctor’s decision,” said Pochettino. “The rules and the protocols are there. Our medical staff followed the protocol.

“He’s OK. We hope it is not a big issue. He walked away from the stadium. We know we have to keep watching and monitoring him because it was a big knock.”

What are Uefa’s protocols?

According to Uefa’s concussion protocol, “in the event of a suspected concussion, the referee stops the game for up to three minutes, to allow the injured player to be assessed by the team doctor.

“A player will only be allowed to continue playing on specific confirmation by the team doctor to the referee of the player’s fitness to carry on.”

In this instance, referee Mateu Lahoz stopped play for five minutes and received confirmation before allowing Vertonghen to re-enter the game, after the correct protocols.

Ex-Aston Villa striker Dion Dublin told BBC Radio 5 Live: “I had so much concussion during my career. You have to stay still and do exactly what you are told. Going back on the pitch was incredibly risky for Vertonghen because if there was any challenge near him, it could have been terrible.

“If the player is saying he is OK, it is difficult for a medical professional to say ‘no you cannot go back on.”