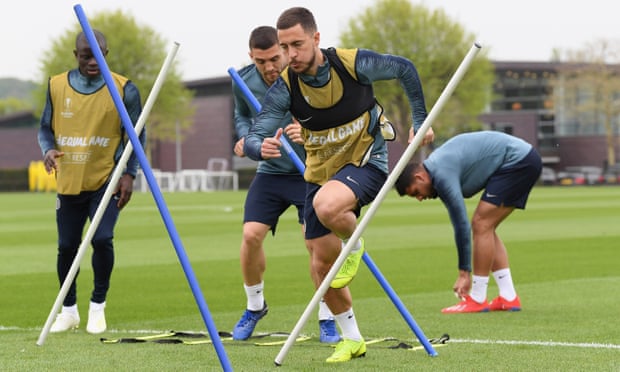 Eden Hazard is expected to play against Frankfurt but Chelsea have defensive problems. Photograph: Darren Walsh/Chelsea FC via Getty Images

Maurizio Sarri has admitted Chelsea will prioritise a top-four finish ahead of winning the Europa League as a means of restoring the club to the Champions League next season, with the Italian’s defensive options to be severely depleted over the final few weeks of the campaign.

Victories in the last two league games, against Watford and Leicester, would almost certainly secure a return to Europe’s elite club competition after a season’s absence. Relatively inconsistent domestic form, particularly away from home, since the turn of the year meant Sarri had previously publicly targeted success in the Europa League, which also carries the carrot of Champions League qualification. However, on the eve of his side’s daunting semi-final against Eintracht Frankfurt, a sense of pragmatism appeared to have taken hold.

Sarri is still expected to field a strong side in Frankfurt, with Eden Hazard likely to start, but there is concern over the lack of options at centre-half. Antonio Rüdiger has undergone surgery in Rome on a torn meniscus in a knee – an injury originally sustained in the loss at Liverpool and aggravated in Sunday’s draw at Manchester United – and faces at least three months on the sidelines, while Gary Cahill has suffered an achilles tendon complaint and has not travelled.

César Azpilicueta, who operated on the right of a back three under Sarri’s predecessor, Antonio Conte, has trained at centre-back and will stand in if either Andreas Christensen or David Luiz is ruled out. The young Dane, who featured heavily under Conte last term, has been a regular in the Europa League this season.

“We are in trouble with the centre-backs,” said Sarri. “In the last two training sessions, we played with Azpilicueta as a centre-back in case. He’s the only one who can play there. We’ve played 58 matches this season and, in the past, we’ve been lucky with injuries. In the last 10 days, not so lucky.”

“Antonio is a very important player for us and to miss any player at this stage is not the best news we could have,” said Azpilicueta, a winner of this competition with Chelsea in 2013. “But he is a strong man. We know he’ll be back as soon as possible, and fit enough to keep his level. I’m ready to play wherever the manager asks me to play. I’ve played centre-back for Chelsea and the national team. I’m ready for whatever.”

Eintracht are imposing hosts enjoying a fine season, but local concerns centre on the absence of the suspended Ante Rebic and the loss of Sébastien Haller to injury, denying them two of their rampaging front three and heaping more pressure on Luka Jovic to add to his tally of eight goals in this competition.

There are fears, too, that a slog of a season has finally caught up with Adi Hütter’s side. They have failed to win any of their last three Bundesliga matches in their own pursuit of the Champions League and now hover three points clear of fifth place and the chasing pack.

Yet the Europa League has tended to coax the best from them. Eintracht have never lost at home to English opposition, and emerged from a group ahead of Lazio and Marseille, then eliminated Shakhtar Donetsk, Internazionale and Benfica in the knockout phase.

“But Chelsea are a powerhouse, a pure Champions League team,” said Hütter before rattling off the opposing players he expects to face. “Azpilicueta, David Luiz, Giroud, Higuain – they have lots of experience – Hazard, Pedro who played in Barcelona… Most of our players are playing their first European season. But we’ve been brave and deserve to be here. On a special day, we can hurt even a special opponent.”