As Irving walks off court before final buzzer 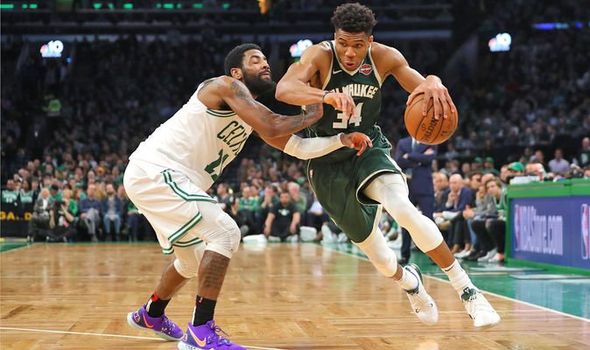 As the final seconds ticked off the clock at TD Garden on Monday night, Kyrie Irving marched off the court well ahead of his Celtics teammates. He got off the court and down the long hallway outside of Boston’s home locker room so fast that by the time he ducked in the door and disappeared from view, none of his teammates had even reached it.

It’s understandable why Irving would want to leave the court so quickly. The past three games of this Eastern Conference semifinal — including Games 3 and 4 at home — have been ones for him to forget.

And after his latest dud Monday night — going 7-for-22 while scoring 23 points in Boston’s 113-101 Game 4 loss to the Milwaukee Bucks — the Celtics find themselves on the brink of going home for the summer.

“I missed shots,” Irving said. “Shots just didn’t go in. You go out and prepare, like I said. Sometimes they go in, sometimes they don’t.

“They do a great job of loading, too. They’re making the paint look crowded whenever I’m driving or wherever I’m going on the court, seeing two or three bodies, sometimes four.

Over the past three games, Irving has gone 19-for-62 (31 percent) from the field. Those 43 missed field goal attempts are the most Irving has ever missed over a three-game stretch in the playoffs, according to ESPN Stats & Information research.

Not surprisingly, Boston’s fortunes have cratered along with Irving’s faulty jumper. The Celtics went from winning Game 1 in convincing fashion to take home court in this series — and, in doing so, seemingly exposed every Bucks flaw observers around the league had been wondering if someone would exploit in the playoffs all season — to dropping the past three in a row to find themselves, shockingly, on the brink of elimination.

Irving, though, remained defiant afterward that his shot, eventually, would start falling.

“Who cares?” Irving said in response to a question about his shooting woes. “I’m a basketball player. Prepare the right way. Like I said, it’s a little different when your rhythm is challenged every play down. You’re being picked up full court. They’re doing things to test you.

“The expectations on me are going to be sky-high. I try to utilize their aggression against them and still put my teammates in great position while still being aggressive. I’m trying to do it all.

He certainly wasn’t Monday. Then again, neither were his teammates. The Celtics combined to shoot 37.8 percent from the floor and 9-for-41 (22 percent) from 3-point range. On uncontested jumpers, the Celtics were 14-for-39 overall, and they were 6-for-26 from 3-point range — while Irving himself was 1-for-7 and 0-for-4, respectively.

The Celtics were aggressive early in the game attacking the basket — getting away from the steady diet of jump shots that doomed them in Game 3 and scoring 44 points in the paint after putting up just 24 in Game 3. They even managed to get both Giannis Antetokounmpo and Khris Middleton — Milwaukee’s two All-Stars — to pick up their fourth fouls midway through the third quarter, seemingly giving Boston a chance to take control of the game.

Instead, the Celtics allowed the Bucks to outscore them 22-13 over the final 8:18 of the third while Antetokounmpo watched from the bench with four fouls to all but put the game away. Although Boston made a couple of runs in the fourth to make things interesting, at one point pulling back within five, the Celtics never seriously threatened again.

“I’m sorry to say it, but our offense is dictating our defense,” Marcus Morrissaid. “We’re not making shots. We’re not getting back.

“I feel like we’ve been pretty soft a little bit.”

The Celtics will be hoping that changes Wednesday, when they return to Milwaukee with a daunting task in front of them: having to win three straight games against a team that has yet to lose three games in a row all season.

It is a scenario Irving has been in before — when he was playing alongside LeBron James with the Cleveland Cavaliers in 2016, and he and the Cavaliers came back from down 3-1 against the defending champion Golden State Warriors to win the NBA title.

Irving, of course, hit the game-winning shot in Game 7 of that series. And, despite his own play, and that of his teammates, being not nearly good enough through the past three games, he said he remains confident that the Celtics have what it takes to turn this series around.

“It’s unwavering,” he said, when asked where his confidence level in the Celtics stands at this point. “It’s the game of basketball. At this point, we obviously understand the X’s and O’s. It’s just going out and trying to manage the game better.”

If the Celtics fail to do so Wednesday, Boston’s season will end in Milwaukee — and, with it, so could Irving’s time with the Celtics. He is set to be an unrestricted free agent this summer, and that long walk down the hallway Monday night could’ve been the final time Irving makes it as a Celtic if he chooses to head elsewhere come July.

Irving was asked, as he walked off the court and down that hallway, what was going through his mind.

“The game was over,” Irving said.