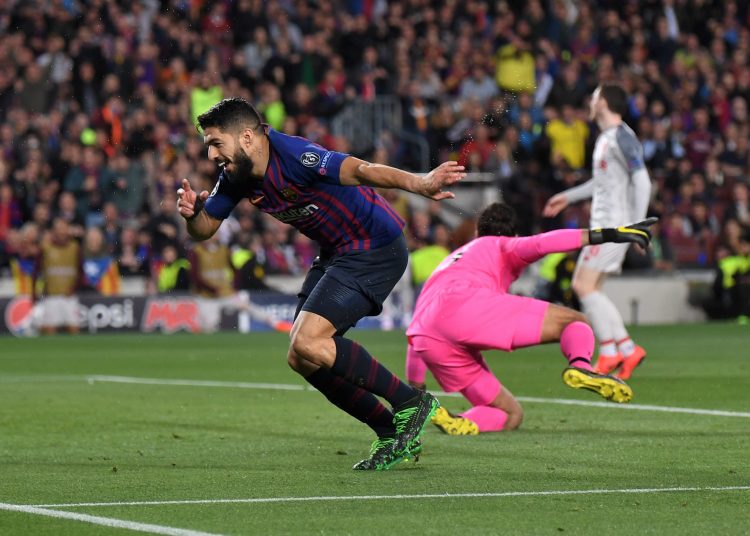 BARCELONA, SPAIN - MAY 01: Luis Suarez of Barcelona celebrates after he scores his sides first goal during the UEFA Champions League Semi Final first leg match between Barcelona and Liverpool at the Nou Camp on May 01, 2019 in Barcelona, Spain. (Photo by Michael Regan/Getty Images)

Luis Suárez expects a warm reception on his return to Anfield and has claimed there will be no repeat of his Camp Nou celebrations should he score against Liverpool in Tuesday night’s Champions League semi-final.

The Barcelona forward upset some of his former club’s supporters during last week’s first leg by celebrating his opening goal and goading Jürgen Klopp’s players; behaviour that was hardly out of character with his time at Liverpool.

Suárez offered a qualified apology to any Liverpool fan annoyed by his reaction to scoring in Barcelona’s 3-0 victory and anticipates that, after 82 goals in 133 appearances for the Merseyside club, he will be well received at Anfield.

“I think there will be more applause than whistles for me. If people want to whistle and that makes them happy – there may be quite a few who are not happy – but I think there will be more who are happy and grateful. When you see the people in the kitchen here are waiting to give me presents for my children, then you see the love that is still there and the warmth that is still there for me. I have a son who was born here and this was the first stadium he went to. That says it all.”

Suárez has not scored an away goal in the Champions League for over three years and promised to curb the celebrations should he end that drought in the second leg at Anfield.

He added: “People who know about football and who love this sport know about the importance of my goal last week. I have all the respect in the world for Liverpool fans. Because I scored and celebrated with my fans I say sorry but the Liverpool fans would applaud me. I am very thankful to Liverpool, to the fans and the club, and obviously it is clear that, if I score a goal against Liverpool, I won’t celebrate it in the same way I didn’t celebrate in Holland when I scored [for Ajax against Groningen].”

Of more importance to Suárez and Barcelona is reaching the Champions League final for the first time since they last won the competition in 2015. The Spanish champions have lost their last three Champions League semi-final ties away from home. Ernesto Valverde’s team are also anxious to avoid a repeat of last season’s quarter-final, when they were eliminated 4-4 on the away goals rule in Roma despite winning the first leg 4-1.

Valverde vowed Barcelona will not change their approach from the first leg and described the enforced absences of Mohamed Salah and Roberto Firmino as “big losses” for Liverpool. He also claimed the memory of Roma could help his team at Anfield.

“Experiences are great because you learn from them,” the Barcelona coach said. “Last year we got a bad result in Rome but the advantage of football is it always gives you another opportunity. We know what is on the table tomorrow and what the opponent can bring to the table as well. We are mentally prepared for that. What you can’t do is even think of being complacent. Tomorrow we are in the semi-final of the Champions League and we understand how important this game is.”