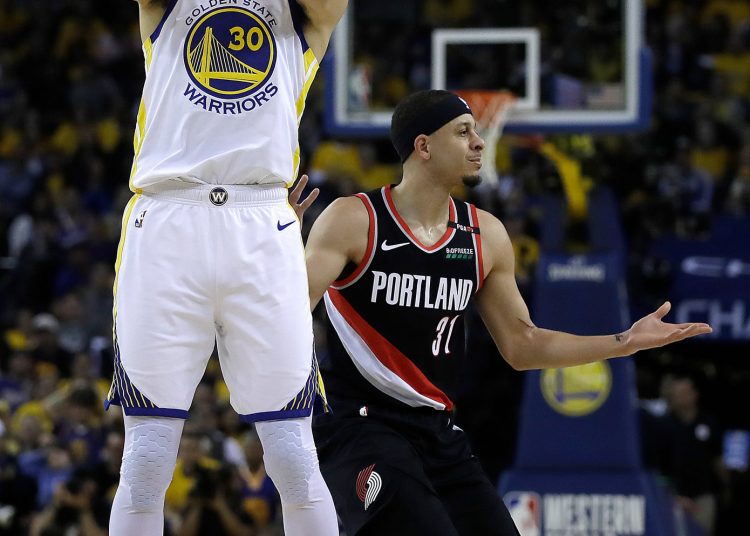 Stephen Curry made nine 3-pointers and scored 36 points, and the Golden State Warriors beat the Portland Trail Blazers, 116-94, on Tuesday night in Game 1 of the Western Conference finals while playing without the injured star Kevin Durant once again.

Curry shot 12 for 23 from the field in his fourth 30-point performance this postseason, finding far more open looks than he had in the last round against Houston. Curry, a two-time N.B.A. most valuable player, outplayed the Portland duo of Damian Lillard and C. J. McCollum, who combined to go 11 for 31 facing a strong Golden State defense.

Klay Thompson had 26 points for the Warriors, including a late one-handed slam. Draymond Green established the energy on both ends early for the well-rested Warriors and finished with 12 points, 10 rebounds, 5 assists, 3 blocks and 2 steals.

Lillard scored 19 points back home in Oakland, just miles from where he grew up. McCollum had 17 and missed five of his six 3s as the cold-shooting Blazers went just 7 for 28 from long range.

Game 2 is Thursday night, and the Warriors are unlikely to have Durant, the two-time reigning N.B.A. finals M.V.P., back from a strained right calf. An update on Durant’s status is expected that day once he is re-examined.

His younger brother, Seth, had only 3 points for Portland, which shot 36.1 percent over all.