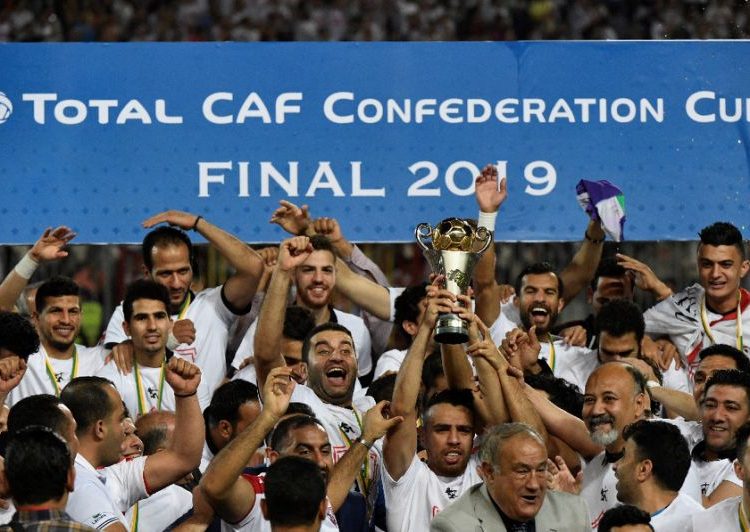 Penalties smiled at Egyptian giants Zamalek to grab their first ever CAF Confederation Cup title, and end a 16-year of continental drought. The White Knights defeated Moroccan side RS Berkane 5-3 on penalties after the return leg of the 2018-19 Total CAF Confederation Cup final ended with 1-0 victory for the home side at the Alexandria based Borg El Arab Stadium, the same result Berkane achieved last weekend at home.

Defender Mahmoud Alaa scored from the spot ten minutes after the break to send the game to penalties after a 1-1 tie on aggregate. Zamalek scored all their kicks, while Hamdy Laachir missed the first kick for Berkane to see the White Knights lifting the second-tier continental club competition for the first time in their history.

Zamalek’s last CAF title dates back to 2003 when they won the CAF Super Cup. They can now enjoy end a long drought, while dreaming of more and more titles.

It was heartbreak for “The Oranges” who reached their first ever continental final just to fall very short from touching the sky. Berkane ended the game a man down after Omar Namsaoui received his marching orders a minute from full time.

Zamalek opted for an attacking line-up aiming for an early goal to neutralize the 1-0 deficit from the first leg. But the game’s first chance fell to the visitors when Laachir’s shot missed target. The hosts replied with Yousef Obama who went head to head with Berkane’s keeper Abdellaoui M’hamedi but missed the chance to his fans’ bewilderment.

Zamalek’s Ibrahim Hassan tried a shot from the distance at the half hour mark but his shot went high. The game turned to be somewhat tense with the referee showing yellow cards to both sides’ players to see the first half ending in a stalemate.

The homers returned from the break on a high note, and eight minutes into the second half they had a penalty after the referee returned to VAR system. Defender Alaa scored from the spot to give Zamalek a 1-0 lead and level on aggregate.

Zamalek pressed to double their lead, while Berkane opted for the counter attacks trying to snatch a valuable away goal. But time passed with both sides’s defenders having the upper hand.

A minute from time Namsaoui was shown the red card for a tough tackle on Mahmoud “Kahraba” Abdel Moneim. But nothing changed as both sides headed to the decisive penalties.

The White Knights will wait next weekend to know their opponents in the 2019 CAF Super Cup from the 2018-19 Total CAF Champions League final between Tunisia’s Esperance and Morocco’s Wydad. The first leg ended in a 1-1 draw in Rabat.