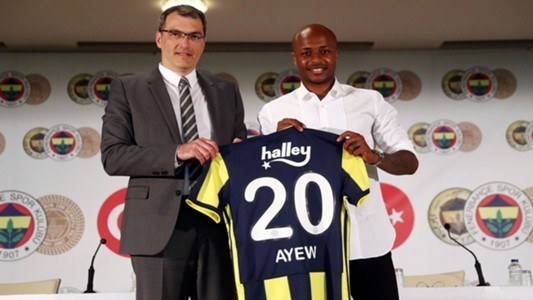 Share on FacebookShare on TwitterShare via Whatsapp
Ghana captain Andre Ayew will return to parent club Swansea after he announced his departure from Turkish giants Fenerbahce where he’s been on loan for the 2018/2019 Turkish Super Lig season. Ayew did not feature in the club’s 3-1 home win over Antalyaspor in their last game of the the season due to injury. Ayew spoke to Fener’s official TV station after the game: ”First of all I want to thank the fans, the club, and the staff. I am leaving this great club with lots of experience. It was a very tough year for us but at least we have managed to finish the season strongly. ”Let’s hope Fenerbahce have a great season in the next campaign. Speaking personally, I have to say that I should have done better. This is a huge club and the memories will remain with me forever.” The 29 year old played 38 games for Fenerbahce in all competitions, scoring just five goals. Ayew will return to Swansea City but it is likely he will leave the Welsh club in this transfer window. His contract at the Liberty Stadium runs until June 2021.
Share381TweetSend
Previous Post