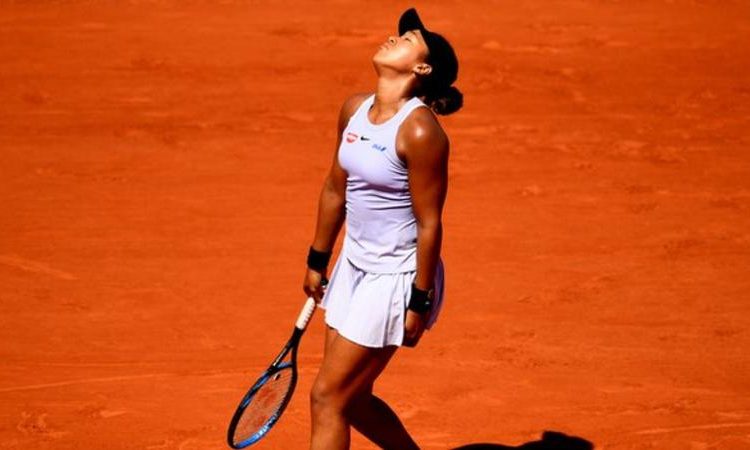 Osaka withdrew from the Italian Open quarter-finals in May because of an injury to her right hand (Image credit: Getty Images)

World number one Naomi Osaka’s bid for a third straight Grand Slam ended at the hands of unseeded Czech Katerina Siniakova at the French Open.

The Japanese top seed made 38 unforced errors as she lost in one hour and 17 minutes at Roland Garros.

“It is incredible, it is something I can’t believe, I’m so happy,” Siniakova said after reaching the last 16 of a Grand Slam singles for the first time.

The 23-year-old right-hander is ranked as the world’s leading women’s doubles player and won that competition at the French Open last year alongside fellow Czech Barbora Krejcikova.

“Roland Garros brings out my best and I hope it will continue,” she added.

Siniakova will play 14th seed Madison Keys for a place in the quarter-finals after the American came through a testing encounter with 20-year-old Russian Anna Blinkova 6-3 6-7 (5-7) 6-4.

Osaka, who followed up her maiden Grand Slam win at September’s US Open with victory at the Australian Open in January, was playing in her first major as the top seed.

Despite her shock defeat, she will remain as the world number one after nearest challengers Karolina Pliskova, Angelique Kerber and Kiki Bertens also made early exits.

On a sun-baked Court Suzanne Lenglen, Osaka looked strangely subdued with the backing of the Paris crowd unable to rouse her.

A double fault on break point at 4-2 in the second set summed up her troubles, drawing gasps from the spectators and leaving Siniakova with the chance to serve out for the match.

More errors from Osaka’s racquet – a wild backhand whacked well long, a weak forehand into the net then another backhand wide – brought up two match points for her Czech opponent.

And she only needed one as Osaka hit another forehand past the baseline.

Siniakova jumped up into the air with both fists clenched, turning and screaming in delight at her box, before Osaka greeted her at the net while nodding in appreciation of the performance.

A hand injury forced Osaka to pull out of her quarter-final at the Rome Masters – the final tournament before Roland Garros – although she did not offer this as a mitigating factor after coming through scares in her first and second-round matches in Paris.

In both she dropped the opening sets before fighting back to beat world number 90 Anna Karolina Schmiedlova and two-time Australian Open champion Victoria Azarenka.

This time she could not do the same.

Siniakova broke for a 5-4 lead and sealed the opener with her second set point, then broke twice more on her way to winning the final five games as Osaka fell apart.