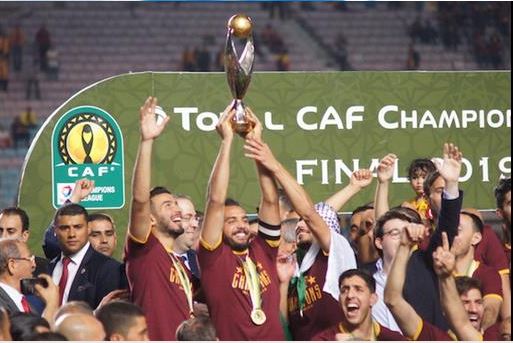 Holders Esperance retained the Total CAF Champions League title after being declared winners following a 1-0 win over Wydad Athletic Club in the final second leg on Friday at the Olympic Stadium in Rades, near Tunis.

After a 1-1 draw from the first leg last week in Rabat, the encounter lived up the billing as the climax to the club championships for the transitional 2018/19 season.

Taha Yassine Khenissi was the first to go for the scoring opportunity but his header at the quarter hour mark was clumsy and landed straight in the hands of Wydad goalie Ahmed Tagnaouti.

In the 21stminute, Algerian-import Belaili put Saad Bguir through, but the latter failed to make use of it as his shot flew over the target.

Wydad appeared to have succumbed to the pressure from the hosts, but rediscovered their feet not long after. Three minutes past the half hour mark, Yahya Jabrane infiltrated the Esperance defence but Rami Jeridi saved the shot.

Moments later, Belaili tried again for the opener but still had no luck as his shot went to the side with no actual threat.

Four minutes before the break, a beautiful display of skills by Ayman Ben Mohamed, who dribbled past his marker, before passing to Belaili, who struck a curler that zoomed into the top corner of the net for the opener.

Wydad resumed more aggressive and eager to even the odds. Ten minutes after the break, El Hassouni’s shot from inside the box was blocked by Esperance Captain Khalil Chammam.

The turning point of the game was at the hour mark when Walid El Karti’s header broke Esperance’s deadlock but his goal was flagged off to the dismay of the Wydad playing body and technical team.

The match was interrupted for over an hour after Wydad abandoned play. After several consultations, with the game halted for well an over, and the refusal of Wydad to resume play, referee Papa Bakary Gassama whistled to end the game. Esperance was declared winner as they cruised to their fourth title.