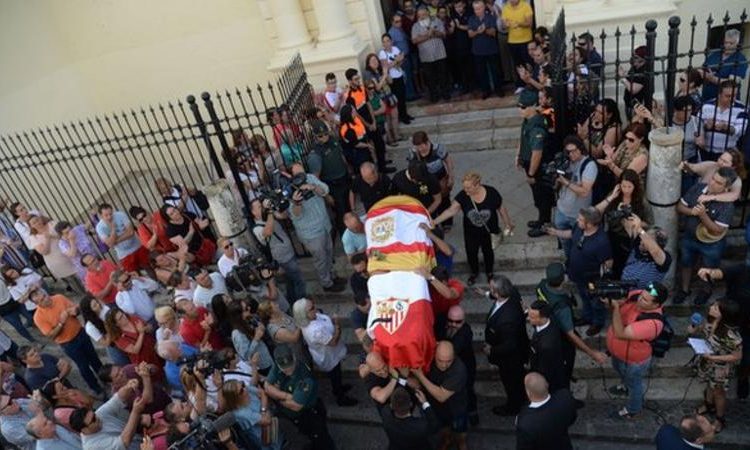 The funeral of former Arsenal winger Jose Antonio Reyes has been held in his home town of Utrera, Seville.

The former Sevilla captain died in a car crash aged 35 on Saturday, while a relative was also killed.

The ex-Spain international’s coffin was taken to Sevilla’s Ramon Sanchez-Pizjuan stadium on Sunday where it was visited by more than 11,000 fans.

Later that night, thousands outside the stadium paid their respects as the coffin made its journey to Utrera.

His coffin spent Sunday night in Utrera’s town hall, where according to Sevilla, “he spent the whole night accompanied by family and friends”.

The funeral took place at the nearby Santa Maria de Mesa and his coffin was draped in the Sevilla flag.

Reyes joined the Gunners from Sevilla in January 2004 and was part of the ‘Invincibles’ side that went through the 2003-04 season unbeaten, winning the Premier League.

He later spent a season on loan at Real Madrid in 2006-07, winning the Spanish title. After leaving Arsenal in 2007 he joined Atletico Madrid and then returned to Sevilla for a second spell in 2016.

The five-time Europa League winner had been playing for Spanish second division side Extremadura this season.