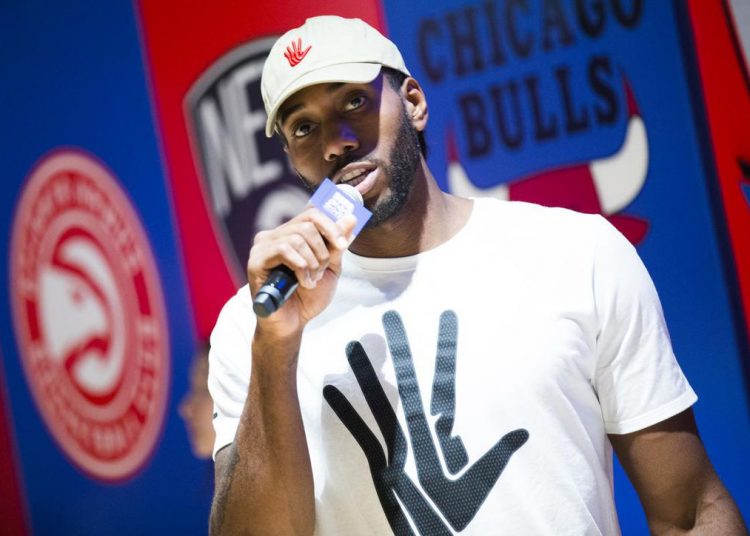 Toronto Raptors star Kawhi Leonard has filed a lawsuit against Nike in the U.S. District Court for the Southern District of California in an attempt to reclaim control over a logo Leonard says he created.

“In 2011, just after being drafted to the National Basketball Association, Kawhi Leonard authored a unique logo that included elements that were meaningful and unique to him,” the lawsuit reads. “Leonard traced his notably large hand, and, inside the hand, drew stylized versions of his initials ‘KL’ and the number that he had worn for much of his career, ‘2.’ The drawing Leonard authored was an extension and continuation of drawings he had been creating since early in his college career.

“Several years later, as part of an endorsement deal with Nike, Leonard allowed Nike to use on certain merchandise the logo he created while Leonard continued to use the logo on non-Nike goods. Unbeknownst to Leonard and without his consent, Nike filed an application for copyright registration of his logo and falsely represented in the application that Nike had authored the logo.”

Leonard addressed the lawsuit briefly while talking with reporters Tuesday ahead of Game 3 of the NBA Finals against the Golden State Warriors.

“It happened over a long time ago. You guys are just finding out. Not a big worry of mine,” Leonard said.

The lawsuit goes on to say that Leonard intends to use the “Klaw” logo in various capacities — including clothing lines, footwear and in connection with sports camps and charity functions — but that Nike has objected to his doing so. Leonard, therefore, wants to regain control of the logo, which he created while he was part of Jordan Brand’s stable of athletes.

Since then, though, Leonard became a shoe free agent — before eventually signing a deal with New Balance earlier this season. The Boston-based company has created multiple campaigns involving Leonard this season — one being “Fun Guy,” and another, more recently, being “King of the North,” playing off a phrase from the recently concluded HBO series “Game of Thrones.”

The nine-page lawsuit would, in theory, allow for a new campaign with New Balance sometime in the future — or at the very least would again give Leonard (should he win) control of a logo he says should be his.

The lawsuit goes on to explain, in detail, how Leonard came up with the idea for the logo, which was developed at the start of his rookie season during his lockout-shortened 2011-12 campaign with the San Antonio Spurs.

“Leonard is known for his extremely large hands,” the lawsuit reads. “Throughout his career, spectators have noticed Leonard’s large hands and they are often described as contributing to his success as a player.

“Since at least his college years, Leonard contemplated and conceived of ideas for a personal logo which would be unique to him and reflect something meaningful relating to his own image. In late December 2011 or January 2012, Leonard refined a logo he had been creating for several years that encompassed his large and powerful hands, his initials and his jersey number.

“Leonard shared his original work of authorship with family and friends, solicited the advice and expertise of a creative designer, received comments and suggestions, and made modifications to his design.”

Later in the lawsuit, it states Leonard and Nike have gone back-and-forth multiple times over the past several months regarding the use of the logo, with the last correspondence being in March, when Nike told him, “it owns all intellectual property rights in the Leonard Logo and demanding that Leonard immediately cease and desist from what Nike claimed was the unauthorized use of the Leonard Logo.”

Finally, the lawsuit says the goal of the plaintiff is for Leonard to be declared the sole author of the logo; that Leonard’s use of his logo doesn’t interfere with Nike’s rights, including “without limitation any rights Nike may claim to possess with respect to the Leonard Logo”; and that the defendant committed fraud on the Copyright Office in registering the Leonard Logo, along with “any such other and further relief as this Court deems just and proper.”

Leonard and the Raptors will face the Warriors for Game 3 of the Finals at Oakland’s Oracle Arena on Wednesday night. The series is tied at a game apiece.