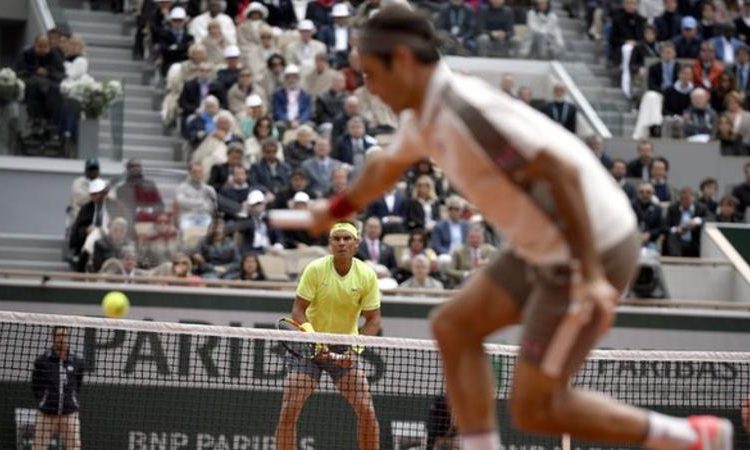 Rafael Nadal is one step away from his 12th French Open title after a 6-3 6-4 6-2 semi-final win over Roger Federer.

Strong winds prevented the contest from hitting the heights anticipated, but there were plenty of majestic moments to please the Philippe-Chatrier crowd.

The Spaniard broke the Swiss icon six times, crucially in the third and ninth games of the second set, en route to doubling his advantage.

He then broke twice more in the third set as he completed his masterclass.

The 33-year-old winner said: “It’s incredible to play Roger here – congratulations to him. He’s probably the best player in history for me.

“It’s always a tough match against Roger. It was tough conditions with the wind. I’m happy to have the chance to play another final here. It’s the most important tournament in my career.”

Nadal underlines why he is the ‘King of Clay’

Federer, playing his first clay season in two years, produced exceptional tennis that would have defeated anyone else – sadly for him he was up against the greatest on this surface.

There were a handful of occasions when the 37-year-old, seeking his 21st major, threatened to improve upon his 2-13 record against Nadal on clay.

After going a break down early in the match, Federer’s wand-like backhand and pressure on the Nadal serve saw him break back. However, the Spaniard responded once more in a thrilling sixth game in which he finally wore down his resilient opponent, who had saved five break points.

Nadal was again on the back foot at the start of the second set as his error, following a brilliant forehand from Federer, saw him down 2-0.

But key to the King of Clay’s win on Friday was his ability to respond immediately. He broke back with a stunning forehand winner and set himself up for another break in the ninth game after coming out on top following a lengthy rally.

By this stage Federer appeared a beaten man. Both players not only had to contend with each other’s brilliance but also the mini dust-storms created by the intense gusts, however Nadal dealt with the situation better.

After he broke the Swiss again in the third game of the third set, the match was all but over. It was finally settled in the eighth game when Federer went long following another impressive first serve from Nadal.

Federer left Philippe-Chatrier to chants of “Roger! Roger!” after what could have been the tennis great’s final appearance at this Slam.