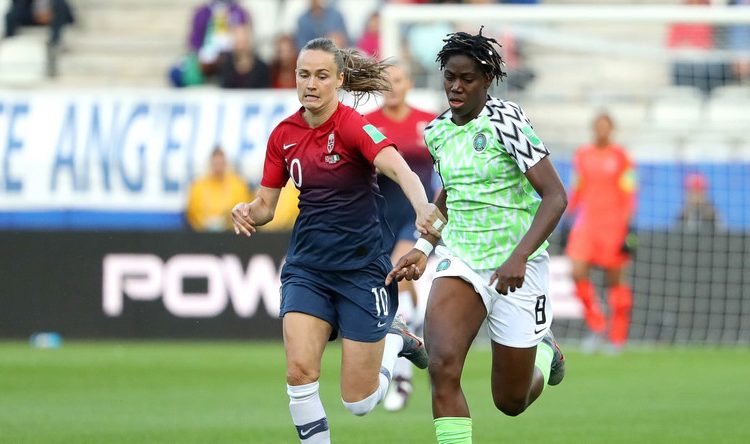 The Super Falcons of Nigeria had a bad start to their 2019 FIFA Women’s World Cup campaign with a 3-0 loss to Norway in one of the Group A fixtures.
The Super Falcons were not overly dominated as the scoreline suggests but were undone by lapses in defence.

They had the first chance on goal after Osinachi Ohale rose high to met a cross from a corner kick but the effort was a light one which didn’t trouble the Norwegian goalkeeper Ingrid Hjelmseth.

After holding firm in the opening minutes, the Super Falcons defence were beaten in the 17th minute from a short corner which fell to Guro Reiten. Reiten got the ball in the box and her effort was deflected past Tochukwu Oluehi to give the 1995 winners the lead.

The Super Falcons failed to respond and in the 34th minute they were behind by two goals after Norway took advantage of some sloppy play by the Nigerian defence to play in Lisa-Marie Utland whose fierce effort whizzed past Oluehi.

Three minutes later Norway were 3-0 up after Ohale turned a cross into her own net to leave the Super Falcons with a huge task in the second half.

Head Coach Thomas Dennerby introduced Chinaza Uchendu, Chidinma Okeke and Uchenna Kanu in the second half, and although they brought in some spark, it wasn’t enough to pull any goal back.

Asisat Oshoala missed Nigeria’s best chance in the second half after being put through by Francisca Ordega but the Barcelona forward could not direct her effort towards goal with the goalkeeper beaten.

Super Falcons defender Onome Ebi who made history as the first African to feature in five World Cup tournaments believes that they have learnt so much from this defeat and will improve in the second game.

“We’re going to go back and look at our mistakes and maybe work on them,” Ebi told FIFA.com.

“The second game will be better than the first, we’ve learned so much from this first game and we’ll come back.

“We have to win the second game, we’ll do all we can to win.”

Nigeria who now third in Group A will now move to Grenoble, where they take on South Korea on Wednesday, June 12.

VIDEO: Michael Essien shows off dance moves on the streets of France