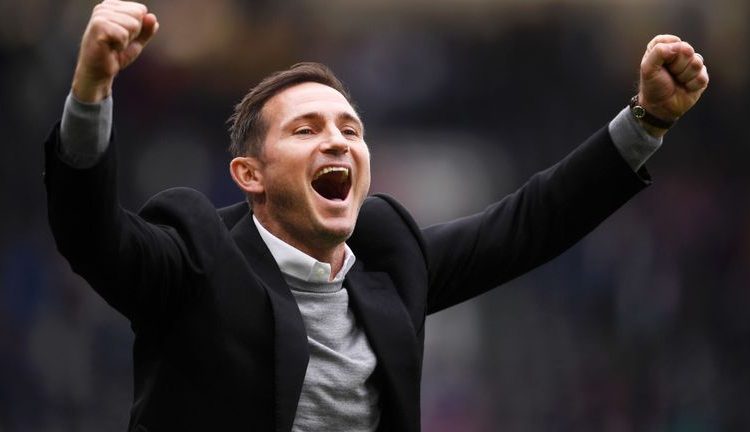 Derby will demand £4m in compensation if Chelsea are to take Frank Lampard as their new manager – though there is a clause in his contract which allows him to move, according to Sky Sports News.

Chelsea are yet to make a formal approach, but Derby are bracing themselves for that to happen now an agreement has been reached for Maurizio Sarri to take over at Juventus.

Sky in Italy understand that, while Chelsea and Juventus have agreed the details of Sarri’s move to Turin, he will not be confirmed until the Premier League club have finalised plans for his replacement, who they hope will be Lampard.

Sarri, who guided Chelsea to a third-place finish in the Premier League and a Europa League win, will complete a return to Italy after a single season in English football. Other managers have been linked with the role, but it is understood Lampard is now Chelsea’s top choice to replace the outgoing Italian.

Massimiliano Allegri, who had been touted as a potential candidate for the role, announced on Thursday he is to take a year out of football after leaving Juventus.

Lampard still has two years on his existing contract, and it is understood while he would find it impossible to turn Chelsea down if an offer is made to him, he is also very respectful of Derby’s fans and the club’s owner, Mel Morris, who gave him his first chance as a manager.

Under the terms of his current deal, any club wishing to take him is required to pay £3.5m in compensation to Derby and that figure rises to £4m if the buying club is playing Champions League football, which Chelsea will be doing next season.

With negotiations and legal discussions yet to start, it is thought it may still take a week or more before Lampard could be introduced as the new Chelsea manager.

Lampard enjoyed an impressive debut season in management, leading Derby to the Championship play-off final where they lost 2-1 to Aston Villa.

Chelsea are facing the prospect of a two-window transfer ban but would be appointing two figures with a deep understanding of the club should Lampard return alongside his Derby assistant Jody Morris.

Morris, who started his playing career at Chelsea, impressed as a youth coach at Stamford Bridge before leaving to join Lampard at Derby.

Both have an acute understanding of the club’s youth setup and players who are out on loan, which could be vital given their impending transfer ban.

Chelsea have appealed against their two-window transfer ban imposed by FIFA to the Court of Arbitration for Sport.

If Chelsea appoint Lampard, he will be the first English manager to take charge of the club in 23 years.