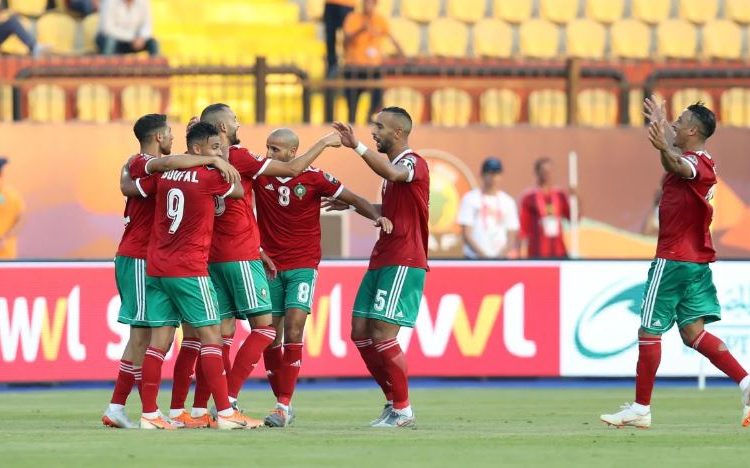 Namibia striker Itamunua Keimune scored on the wrong end of the pitch as the Southern Africans lost 1-0 to Morocco in their Total Africa Cup of Nations (AFCON) Egypt 2019 Group D opener at the Al Salam Stadium in Cairo on Sunday.
The Brave Warriors looked well on course to collect a valuable point against one of the tournament’s favourites, but Keimune headed the ball into his own net with only two minutes left on the clock as he tried to defend a Hakim Ziyech free-kick.

The Southern Africans had lived by their name, holding their own against the Moroccans for most of the match before the single moment of error gifted the Atlas Lions three valuable points.

Coach Herve Renard’s men had struggled to break down a resolute Namibian defence and often tried their luck on set pieces, one of which gave the desired result late on.

They had the chances to score especially in the second half with Sofiane Boufal coming on, but luck never stood their end until the own goal.

The Atlas Lions camped in Namibia’s half passing the ball around with ease while Namibia stuck to their defensive lines. They had their first chance in the 10th minute when Nabil Dibar tried his luck from distance with the Namibian keeper smothering the effort behind for a corner.
Namibia responded on the other end with a similar chance, but skipper Ronald Ketjijere lifted his effort a bit over the bar.

Hakim Ziyech was enterprising for the Atlas Lions in attack and had two chances, first shooting just wide from the edge of the box after the defense failed to clear the ball in the 23rd minute.

Nine minutes to the break, the Ajax Amsterdam forward picked the ball from distance before dancing away from his markers, but the eventual bullet off his boot flew straight to the keeper.

Morocco added more pressure in the second half with Ziyech again coming close in the 72nd minute but Namibian keeper Loydt Kazapua saved with his feet after the striker’s effort was deflected by the defense.
The introduction of Southampton striker Sofiane Boufal spiced up Morocco’s attack. Twice, Ziyech slalomed into shooting range, but he could not wrap his boot around the ball well to direct it into the net.

From a set piece in the 88th minute, Ziyech struck in an in-swinging freekick and Keimune, in a bid to clear off ended up directing it past his own keeper.

“We were the better side and missed many chances. The first game is always difficult. We are happy to win even by a slim margin. We hope to continue on good results and to perform better next time.”

“I salute Namibia coach on his team’s performance. We faced an expected challenge and it was tough to keep the rhythm because of the hot atmosphere that will cause trouble to all teams. First game is always tough and what happened today proves this. We face Cote d’Ivoire next and we have to get ready for that important match.”

“We play in the group of death and we are the underdogs, but I am proud of what we have done today. Most of my players play in domestic league. I’m disappointed that we didn’t get at least a point because we deserved a draw. We will an important role in determining the fate of this group. Morocco is a very strong team and they are favorites for the title.”