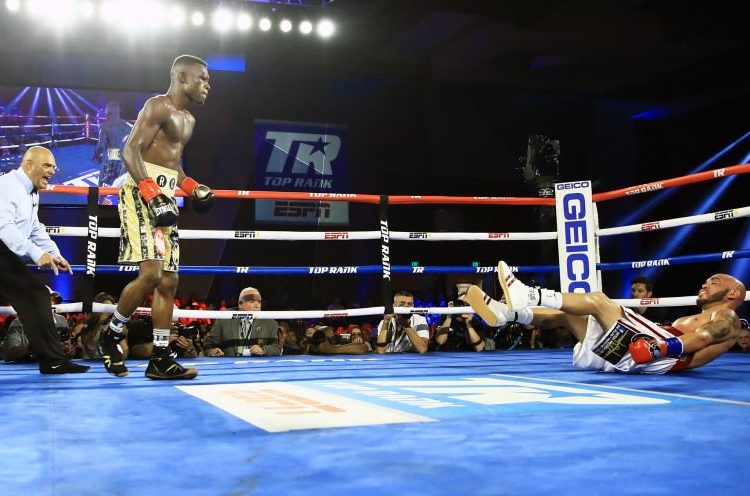 Ghanaian boxer, Richard Commey, has successfully defended his IBF Lightweight title, with an 8th round TKO win over Ray Beltran in Tamecula, California.

Win, lose, or draw, Richard Commey was going to walk out of the ring Friday night retaining his IBF lightweight title.

Commey still wanted to send a message to Teofimo Lopez, who was sitting ringside, of what might happen when the two fighters square off.

Commey dropped Ray Beltran four times before the fight was stopped in round eight Friday night before a boisterous crowd of 2,795 inside the Pechanga Resort and Casino.

Commey knocks Beltran down for the fourth time and this one is over! #CommeyBeltran | @ESPN pic.twitter.com/vIaSOQz9vX

Beltran lost out on a chance at the IBF title at Thursday’s weigh-in when he did not make weight, coming in at 136.8 pounds. Beltran was given two hours to lose the weight, but did not come close to dropping down to 135 pounds.

A deal was struck between Lou DiBella and Bob Arum, who promotes Beltran, ensuring Beltran would not rehydrate more than 10 pounds from the weigh-in, or 146.8 pounds. DiBella threatened to cancel the fight if Beltran was over, but Beltran did make weight Friday morning.

Commey, who is co-promoted by Lou DiBella and Top Rank, was making the first defense of the IBF title he won in his last bout on Feb. 2, a second round knockout over Isa Chaniev of Russia. Beltran last fought on Feb. 10, knocking out junior welterweight Hiroki Okada of Japan.

Beltran was in trouble from the opening bell, as a straight right hand from Commey dropped him to the canvas. Beltran beat the count, but was hurt again against the ropes, forcing referee Eddie Hernandez to administer a standing eight-count.

Beltran rallied in round three, stunning Commey in round four, but that was the only round he clearly won. Commey swung momentum his way in round four, connecting with several punches to the head. Commey dropped Beltran about a minute into round five. Beltran was not visibly hurt, but his punch output began to drop with each round.

Commey, who is originally from Ghana and now resides in the Bronx, New York, ended matters in round eight, dropping Beltran with a counter left hook to the head. Beltran beat the count, but referee Eddie Hernandez stopped the bout at 54 seconds. Beltran was disappointed with the stoppage, as he thought he could have continued.

With the Beltran fight behind him, Commey will now focus on the winner between Teofimo Lopez and Japan’s Masayoshi Nakatani, which will take place on July 19 at the MGM National Harbor in Oxon Hill, Maryland.

“Beltran showed why he was a champion,” said Commey, who has now won his last five bouts. “He’s a great fighter who showed it against me tonight. I was happy to get the job done and defend my title for the first time.

“It looks like Teofimo Lopez is next, but he has a job to do first. That would be a great fight.”

Beltran (36-9-1 1 ND, 22 KOs), who is originally from Ghana and now resides in the Phoenix suburb of Avondale, was diplomatic in defeat.

“He caught me with a good shot in the ninth round, and the referee decided to stop the fight,” said Beltran, who is managed by Steven Feder. “Now I am going to get together with my team and figure out what’s next. If I fight on, I will move up to 140 pounds.”