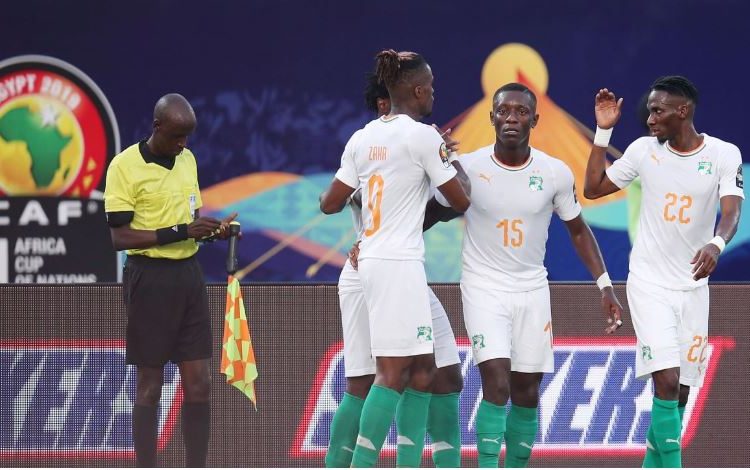 Far from their usual level, the Ivorians still outperformed Namibia (4-1) at the June 30 stadium in Cairo for the third round of Group D of the 2019 Total African Cup of Nations.

It was an unrecognizable team of Cote d’Ivoire that showed up on the pitch in a first period when Ibrahim Kamara’s youngsters missed several chances and also let the Namibians create the game.

In the 19th minute, the Brave Warriors almost opened the scoring through Peter Shalulile, who narrowly missed the header. Four minutes later, the same Shalulile was alone in front of the Ivorian goalkeeper, but his shot was deflected.

In the 29th minute, on a fine job by the Elephants, Wilfried Boni narrowly missed the target after a fine team effort. The same Boni twice missed the opening goal in the 34th minute after a hazardous exit by Namibian goalkeeper, Lloyd Kazapua.

It was not until the 40th minute that the first goal of the game was scored when Toulouse striker, Max-Alain Gradel, took advantage of Franck Kessie’s counter-attack and pass to place the ball in the net.

In the second half, the Ivorians, pushed by their supporters, added to the score in the 58th minute. Geoffroy Serey Die sends a rocket into the Namibian goal, helped by defender Ryan Nyambe who deflects the former ES Setif midfielder’s shot (2-0)

After that goal, the Brave Warriors uncovered themselves to come back. This was done in the 71st minute, when Joslin Kamatuka misled Sylvain Gbohouo’s vigilance (2-1). It is a fair reward for the Namibians who have been abusing the Ivorian defence. This is their first goal of the 2019 Total AFCON.

Unfortunately, the Ivorians accelerated and, seven minutes before the end of the match, Wilfried Zaha, with a volley, made another break for the Elephants (3-1). Maxwel Cornet scored before the referee’s final whistle (4-1).

As broad as it is, this success does not reassure the quality of the game produced by the Elephants on this tournament. Cote d’Ivoire finished second in Group D, behind Morocco.

These two teams reach the round of 16 directly. South Africa, third with 3 points, must wait to know its fate. Namibia is eliminated.

#AFCONonCiti: Christian Atsu's AFCON over, leaves for England for treatment