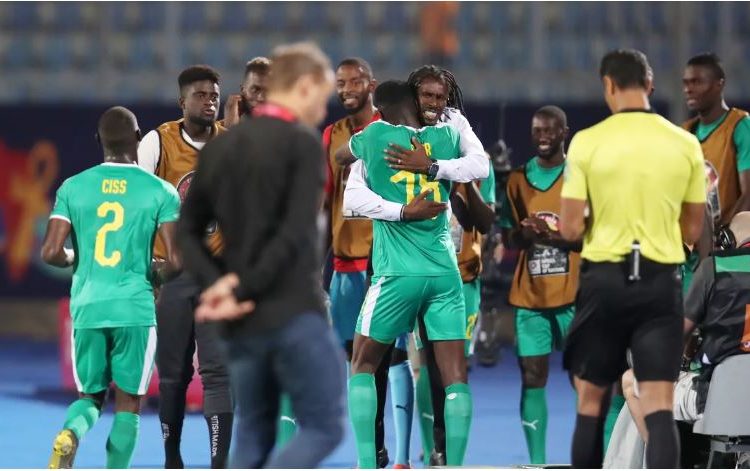 A brace from Sadio Mane and a goal from Ismaila Sarr was all Senegal needed to beat Kenya in their Group C Day three clash and cement their place at the next round of the Total Africa Cup of Nations Egypt 2019.

Mane, who missed a first half penalty scored twice in the second half as the Teranga Lions cut the Harambee Stars to size at the June 30 Stadium, and take their place among the last 16, and further keep alive their hopes of a maiden title at this level.

Following a lone goal loss to Algeria in their previous clash, the Lions returned in full force against the East Africans, who ended the game with a man less after Philemon Otieno was sent off after a second yellow card on 77 minutes.

Senegal thus joined Algeria as the automatic qualifiers from Group C, with the latter maintaining their 100 per cent record after a 3-0 routing over Tanzania in the other clash at the Al Salam Stadium, also in Cairo.

As expected, it was a mountain for Kenya, who needed to avoid defeat to remain in contention after their superb comeback win over neighbours Tanzania last Thursday at the June 30 Stadium.

However, goalkeeper Patrick Matasi denied Senegal talisman Mane from the spot on 29 minutes after Otieno had fouled his marker. The action ensured both teams headed for the interval even, but it turned out to be a different story in the second part of the game.

Senegal resumed like wounded Lions and Sarr broke the deadlock three minutes past the hour mark to give the West Africans a deserved lead.

Mane made amends to double the score on 71 minutes before completing his brace from the spot seven minutes from the spot after Otieno had felled Sarr, to ensure a triumphant passage into the next round.

Kenya forward Micheal Olunga was unlucky to grab a consolation for the Harambee Stars after Amigo Gomis, who replaced Edouard Mendy during the warm-up, denied him with a good save from his long range strike.

Algeria topped the group on the maximum nine points, three richer than Senegal with Kenya on three points. Tanzania finished at the bottom pointless. Kenya will have to wait till tomorrow’s to learn if they may scrap through as one of the four best third place teams.

#AFCONonCiti: Cote d'Ivoire humble Namibia into round of 16