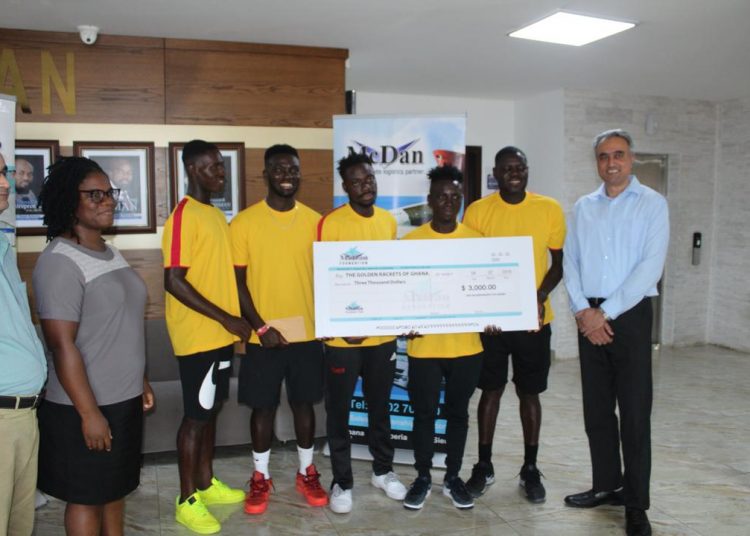 McDan Foundation, a subsidiary of the McDan Group has presented a cheque for $3,000 to Golden Rackets, the national tennis side at its East Legon Head Office.

The financial reward was in recognition of the team’s qualification for Europe-Africa Zone III from Zone IV in Congo Brazzaville recently.

Ghana Tennis Federation president Isaac Aboagye Duah told the media “We are here to pay homage to Dr Daniel McKorley for believing in us and supporting us all these years. This is the results of his investment.

” We declined, we have  been absent from Davis Cup for four years, if you don’t participate in the Davis Cup, you lose points and that was why we dropped to Zone IIII.”

Skipper of the side, Herman Abban, speaking on behalf of his mates expressed thanks to Dr McKorley for rallying behind the team saying, ” …He told us he works with champions and that he believes in us. We were motivated by his words, money was not the issue, he urged us on and we played for our nation. We want to thank him his investment will not go waste.”

An executive of  McDan Group,  Leonora Appiah, speaking on behalf of   Dr McKorley said ” Doc., has passion for tennis, he is super excited and he has promised to support the sport to the highest level. He has spent over $600,000 on tennis, this is indeed a good news for Ghana tennis. ”

Ghana finished tops in Group A after defeated Cameroun 2-1 and 2-0 at the hard Court, Kintele Complex , Congo Brazzaville.

#AFCONonCiti: Experience was key to win over Guinea-Bissau - Asamoah Gyan