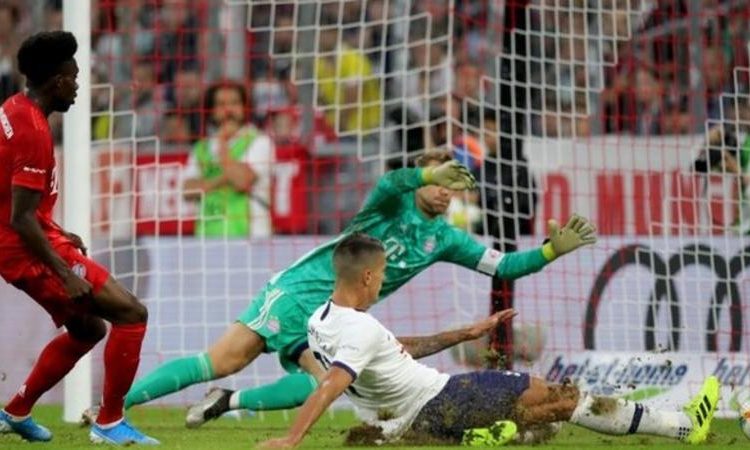 Tottenham finished pre-season with a penalty shootout win over Bayern Munich in the Audi Cup final after a 2-2 draw.

Spurs led 2-0 as Erik Lamela slid in to convert Georges-Kevin Nkoudou’s low cross at the back post and Christian Eriksen drilled in a second for Spurs.

But Bayern came back thanks to goals from teenagers Jann-Fiete Arp and Alphonso Davies, who levelled with a fantastic 25-yard curling effort.

Paulo Gazzaniga saved from David Alaba and Jerome Boateng in the shootout.

Spurs lost defender Juan Foyth in the second half to a serious-looking ankle injury and he left on a stretcher.

Hosts Bayern did threaten though, with Renato Sanches’ shot needing a save from Gazzaniga before goals from Arp, a summer signing from Hamburg, and Canada international Davies.

Spurs won the shootout 6-5 with Eriksen the only Tottenham player to miss his kick.

It was Tottenham’s second game against European giants in 24 hours, having beaten Real Madrid 1-0 on Tuesday in the semi-final of the Allianz Arena friendly tournament.

Real Madrid finally picked up their first win of pre-season, at the fifth attempt, as they beat Fenerbahce 5-3 in the third-place play-off thanks to Karim Benzema’s hat-trick.

Garry Rodrigues gave Fener, who lost 6-1 to Bayern Munich on Tuesday, an early lead from the edge of the box.

Benzema converted Vinicius Jr’s cross to level and then headed in from Toni Kroos’ free-kick.

Nabil Dirar’s deflected shot got the Turkish side level – but Benzema then headed in Lucas Vazquez’s cross for his third.