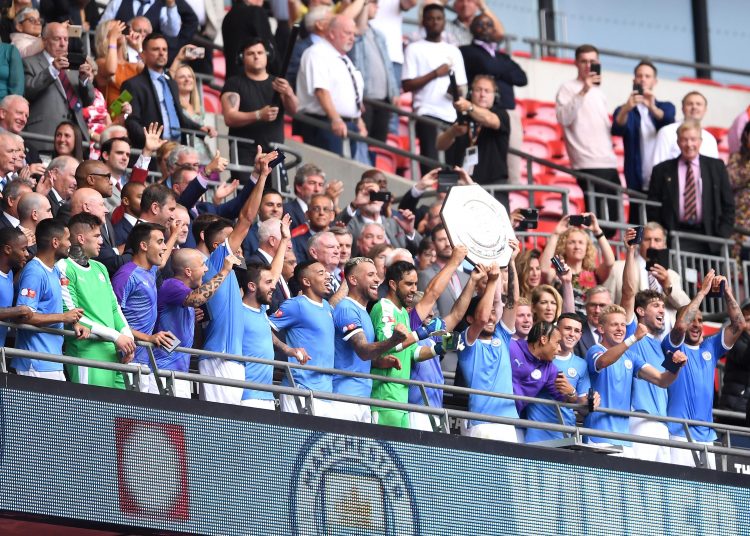 46
SHARES
2
VIEWS
Share on FacebookShare on TwitterShare via Whatsapp

Manchester City won the Community Shield on penalties after edging Liverpool in an entertaining game in front of a raucous Wembley.

The meeting between two outstanding sides did not disappoint.

The woodwork was hit three times in quick succession in the second half, as Sterling struck the post with a one on one, Virgil van Dijk shot against the underside of the bar and Liverpool’s Mohamed Salah hit a post.

The Reds were level when Joel Matip headed home from Van Dijk’s cross.

At that stage, Liverpool were the most likely team to win with Salah having at least three chances – most remarkably when his header was sensationally cleared off the line by a Kyle Walker bicycle kick.

And so the game went straight to penalties with City scoring all of theirs.

A game whose competitive status is often questioned – and might end up meaning little as the season goes on – was nonetheless an entertaining start to the top-level season. A curtain-raiser if you will. 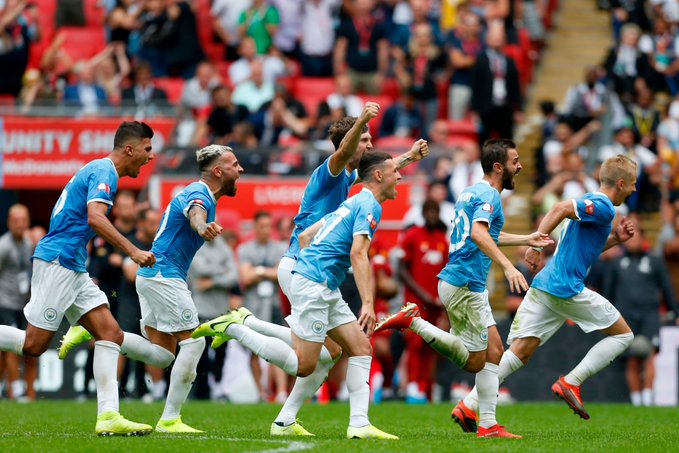 Manchester City started the game with no recognised striker and Sterling playing up front. That only lasted 13 minutes, because an injury to Bayern Munich target Leroy Sane meant Jesus was brought on. Sane was fit enough to later climb the Wembley steps and collect his medal.

By the time he has departed, City were ahead, with Sterling netting during a period they were down to 10 men.

Kevin de Bruyne, who missed a large portion of last season through injury, was majestic – especially in the first half – with a big hand in the opening goal.

The Belgian found David Silva, who knocked the ball on for Sterling to blast home. His shot was straight at Alisson, but hit with such venom from close range he could not keep it out

City definitely flagged after the break, but they could still have scored more with Sterling hitting the post after Jesus stepped over a David Silva through ball.

And then he really should have done better after being sent through again, this time by Walker, but he stumbled when trying to go round Alisson.

Debutant Rodri, playing the Fernandinho role as a sitting midfielder, was solid for the most part, doing the simple things well without making any headline-making passes.

But he was caught daydreaming once as Salah took the ball off him but Bravo – who was excellent in his first appearance since last year’s Community Shield – was off his line quickly to stop the Egyptian.

One slight change to the way City played saw Bravo play short goal-kicks in his box to Nicolas Otemendi, taking advantage of the new laws this summer which passing teams like City and Liverpool are likely to utilise.

They were perhaps lucky the game went straight to penalties and not extra time, with Liverpool in the ascendancy once they had equalised.

But City start the season – as they started last year – with the Community Shield.

Reds boss Jurgen Klopp said before the game he was surprised the Community Shield is not taken more seriously – and went on to question what the point of holding the game even was.

It was the first of seven competitions Liverpool take part in this season, with their Premier League opener against Norwich on Friday followed by the Uefa Super Cup against Chelsea in Istanbul on Wednesday.

Klopp, despite his reservations about the game, named the strongest team he could – including nine of the XI who started the Champions League final in June.

Divock Origi might have been their unlikely hero last season, but Sadio Mane he is not. The Senegal forward returns to training on Monday after his Africa Cup of Nations final heartbreak. And Origi lacked the killer edge on the left side of the front three.

Roberto Firmino and Salah – who both played less than one pre-season friendly each after summer internationals – looked sharp without scoring.

Firmino’s volley after a good turn was well saved and Salah should have done better twice after Zinchenko errors.

Liverpool looked a better team after the break though – with 64.3% possession and 13 shots to City’s three in the second half.

Van Dijk – one of three Liverpool players nominated for the Fifa Best award last week – was so unlucky not to equalise when the Dutchman’s’s shot went over Bravo but hit the underside of the bar and bounced onto the line.

But he did set up Matip’s equaliser after City failed to sufficiently clear Jordan Henderson’s free-kick.

Salah really should have won the game for Liverpool. One shot looped off Zinchenko and hit the roof of the net, before he took advantage of Rodri’s mistake only to be denied by Bravo.

And the big moment was when he had a shot saved by Bravo, but turned the rebound over the keeper into what appeared to be an empty net before the fantastic intervention of Walker.

On to penalties it went and Bravo’s save from Wijnaldum was the difference.