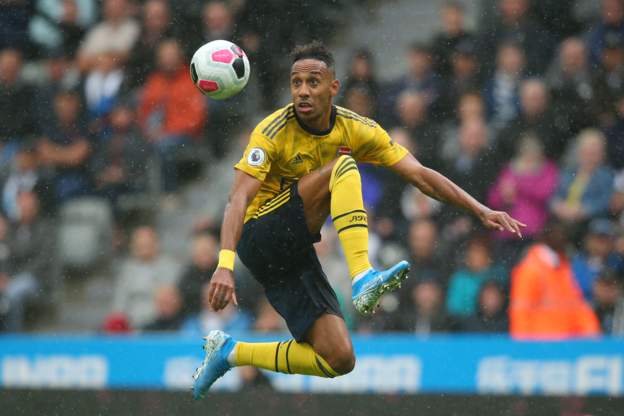 Pierre Emerick-Aubameyang’s second-half goal helped Arsenal to a 1-0 win over Newcastle on the opening day of the season.

The Magpies failed to trouble Arsenal’s defence after Jonjo Shelvey had hit the post with the scores level.

The game was played out in front of a crowd of 47,635, almost 5,000 below capacity, as some fans staged a boycott over owner Mike Ashley’s running of the club, and while the Magpies gave as good as they got for long periods – Jonjo Shelvey hit a post before the break – they struggled to create chances and were made to pay for it.

Arsenal boss Unai Emery largely kept his powder dry as summer signings Dani Ceballos, Nicolas Pepe, and Gabriel Martinelli were introduced from the bench, but they headed home satisfied with a sixth win in seven visits to St James’ Park.

Both sides started with intent, the Gunners moving the ball confidently at the back and looking to find space for Aubameyang, while Newcastle debutant Joelinton put himself about upfront, with Miguel Almiron probing behind him.

Arsenal enjoyed the better of the possession but, with defences on top, keepers Martin Dubravka and Bernd Leno spent the first 15 minutes of the season as virtual spectators.

That changed within minutes after Almiron turned and broke swiftly before setting up Javier Manquillo to send a cross just over the head of Joelinton, who sent a glancing effort just wide after Matt Ritchie had recycled the ball.

Leno was saved by the frame of the goal after Shelvey’s deflected 20th-minute shot had eluded his outstretched arm, although Dubravka was relieved to see Henrikh Mkhitaryan sky his effort high over at the other end with Nacho Monreal causing problems down the left three minutes later.

rearguard as Newcastle warmed to their task, but Dubravka was called upon for the first time with 14 minutes of the first half remaining to beat away Aubameyang’s stinging drive at his near post.

Almiron cleared the crossbar with a speculative 39th-minute attempt from distance, but the sides remained locked together as the half-time whistle sounded.

The visitors almost forced the breakthrough when Granit Xhaka picked out Aubameyang with an astute pass, but Paul Dummett blocked the striker’s 52nd-minute shot and saw the ball loop up on to the roof of the net.

But the Gabon international was not to be denied and fired his side ahead six minutes later when full-back Ainsley Maitland-Niles picked off Dummett’s attempted pass to substitute Jetro Williams and then crossed for the frontman to control before lifting the ball over the advancing Dubravka.

Bruce sent on winger Allan Saint-Maximin with 24 minutes remaining and the Frenchman wasted little time in forcing his way into the game with a dangerous run and cross within seconds of his arrival, then forcing Leno into a late save after cutting inside, but his efforts ultimately proved in vain.