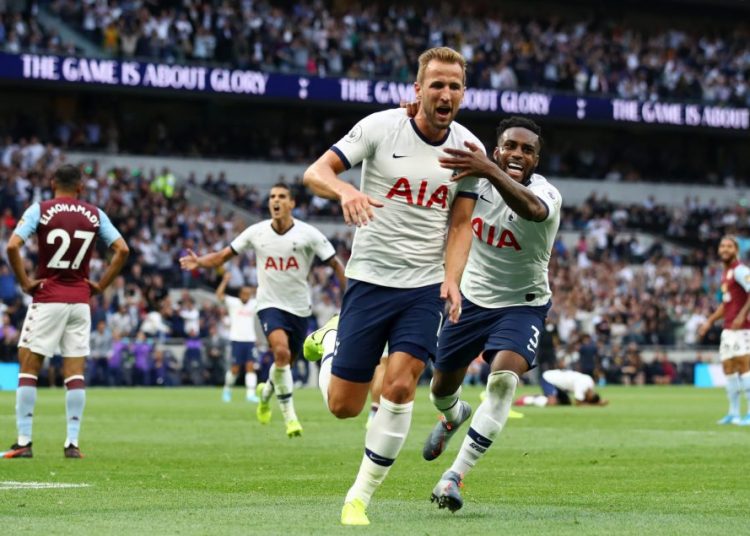 John McGinn had put the visiting side a goal ahead early on and were frustrated by goalkeeper Tom Heaton who made a number of saves.

Ndombele got the breakthrough after 72 minutes before Harry Kane put Spurs ahead four minutes from time. Kane then sealed the win with his second in added time.

Tottenham defender Jan Vertonghen was not included in the starting line-up against Aston Villa.

The Belgium international was ruled out through injury, with Davinson Sanchez coming in, while deadline-day signings Giovani Lo Celso and Ryan Sessegnon were not involved.

Villa handed debuts to four players as Tom Heaton, Bjorn Engles, Trezeguet and Wesley all got the nod.

After Lucas Moura missed a fine chance to put Spurs ahead, it was Villa who took a surprise lead in the ninth minute.

Tyrone Mings’ long ball up field found John McGinn, who held off the challenge of Danny Rose to shoot low past Hugo Lloris.

Harry Kane headed over just before half-time as Villa went in 1-0 ahead.

Spurs were knocking on the door as Moussa Sissoko fired a shot wide and Kane had an effort blocked.

Tottenham finally found an equaliser in the 73rd minute through debutant Tanguy Ndombele.

After Heaton pushed away Davinson Sanchez’s header, the ball came to Ndombele and the midfielder curled an effort into the back of the net.

Kane put Spurs ahead in the 86th minute, firing home from close range after Eric Lamela’s low shot was deflected into the striker’s path.

He then added his second in added time to put the result beyond doubt and complete the comeback.