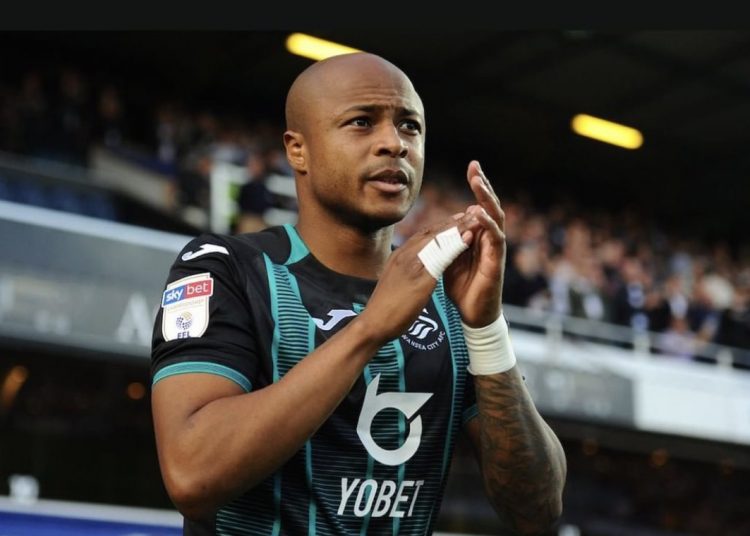 It’s not always been roses and chocolate in the relationship between fans of Championship side, Swansea and Ghana international, Andre Ayew.

Ayew, after his move to the then Premier League club from french club Marseille, quickly became a fan favourite and secured a big-money transfer to West Ham.

After a short but productive time at the East London club, Ayew returned to Swansea as the Welsh club looked to retain their Premier League status.

After their relegation, however, many fans began to question the commitment of Andre and his brother Jordan as both sought a path out of the club and back into the top flight.

This summer, Jordan’s move to Palace was made permanent with fans expectant – some even hoping – that Andre would follow him out of the Swans door, with over a week to go until the transfer window closes.

However, Andre’s performances for the Welsh club at the start of the season have had fans reconsidering this and praying for the window to shut.

Some have also taken to Twitter to appeal to the Black Stars captain to stay at the club.

A number of them believe that keeping Andre and teammate, Borja Baston who has also discovered a new lease of life would almost certainly guarantee promotion back up to the Premier League.

Swansea have played four games this season, Andre Ayew has played three of them, and has been influential in each.

Against Northampton, he scored twice as Swansea came from behind to win in the EFL Cup.

He played a huge role in the 3-2 win over Preston before providing two assists as the Swans beat QPR on Wednesday.

His performances have had Swansea fans buzzing and has left many of them wondering whether only one Ayew leaving this summer might be enough.

It‘s awesome seeing you playing for us again. I just hope you stay until the end of the season

Hope you stick around Andre! Great performance from you and the rest of the team again.

Well played once again, my opinion of you and some others wasn’t great when we’re relegated but I can’t fault your efforts so far this season! Well done Andre

Excellent. Keep your sleeves rolled up and help the Swans get back to the Premier League! You’ll get your big money move then 😉

Nothing will be gained until If is done. We don’t expect you to stay but we need you to stay this season. We need you beyond January. Have faith as we have with you. Something special is happening

Even one Fenerbahçe fan asked him to return to Turkey.

Come back to Fenerbahçe king

🎬 Extended highlights of tonight's victory at QPR are now available! 🎬