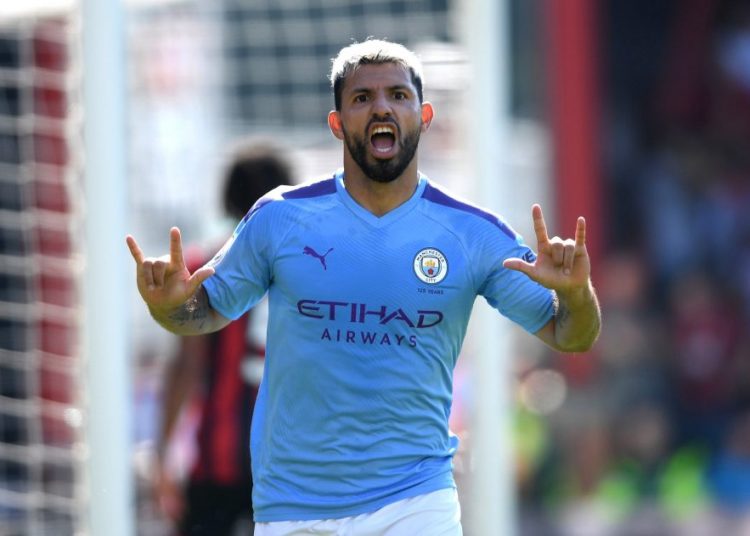 Sergio Aguero took his career goal tally up to 400 after scoring a brace during Manchester City’s win at Bournemouth.

The Citizens won 3-1, with the striker opening the scoring before Raheem Sterling fired them into a 2-0 lead.

Harry Wilson’s excellent free-kick pulled a goal back for the Cherries just before half-time but Aguero’s poacher’s finish after the break sealed the three points for City, who are back to winning ways.

Pep Guardiola’s men were good value for their win and they made a fast start with Bernardo Silva firing the ball just wide inside the first five minutes.

Aguero gave them the lead on 14 minutes after latching onto Kevin De Bruyne’s mis-hit before placing the ball past Aaron Ramsdale into corner of the net.

There was then a lengthy stoppage when Cherries full-back Charlie Daniels went down and was stretchered off with a suspected dislocated knee cap.

And to add insult to injury, the hosts found themselves 2-0 down when David Silva played a brilliant through ball and Sterling finished emphatically.

The Wales international beat Ederson with a free-kick from 25 yards out which went in-off the post just before half-time.

It was an open contest at the start of the second-half and both sides were guilty of missing big chances – Callum Wilson shooting straight at Ederson when put through on goal, while De Bruyne shot wide from ten yards out.

Silva had a shout for a penalty turned down following a VAR check.

But City killed the game moments later when the captain made a marauding run into the Bournemouth box and Aguero poked the ball home.