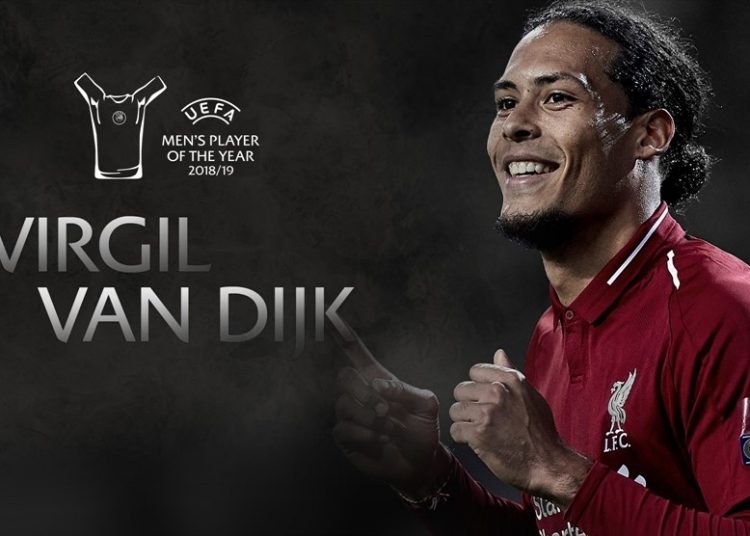 Liverpool defender Virgil van Dijk has been named UEFA Men’s Player of the Year for 2018/19.

The Dutch international beat off competition from three-time UEFA Men’s Player of the Year Cristiano Ronaldo and two-time winner Lionel Messi. The 28-year-old centre-back received the trophy on stage in Monaco during the UEFA Champions League group stage draw.

Why did Van Dijk win the vote?

Following Liverpool’s 2018 final defeat by Real Madrid, Van Dijk had every reason for nerves ahead of the 2019 decider, but his concentration did not waver. He shut out the opposition and was named man of the match as his side edged out Tottenham Hotspur in Madrid.

Fearless since arriving from Southampton in January 2018, Van Dijk kept more clean sheets than any defender in Europe’s top five leagues in 2018/19. While Liverpool fell narrowly short in the Premier League, his solid presence (and occasional goal scoring efforts) provided the platform for a sixth European Cup.

How Van Dijk was chosen

The jury comprised the 80 coaches of the clubs that participated in the group stages of the 2018/19 UEFA Champions League (32) and UEFA Europa League (48), along with 55 journalists selected by the European Sports Media (ESM) group, one from each of UEFA’s member associations.

Jury members picked their top three players, with the first receiving five points, the second three and the third one. Coaches were not allowed to vote for players from their own team.

“You could write a book about Virgil van Dijk’s strengths and abilities. He is still young, but he’s so mature.”
Jürgen Klopp, Liverpool manager

“The ‘Swagger Don’. Virgil is suave on and off the pitch. He makes everything look easy, doesn’t he? When you’ve got him behind you, you’ve got that feeling of security. He’s been an absolute rock all season.”
Alex Oxlade-Chamberlain, Liverpool midfielder

“He embodies the full picture of a defender: his radiance, the way he captains the group, his presence on the pitch, and also now the prizes – the Champions League was fantastic. He can be an example to anyone who wants to aspire to be the best.”
Ronald Koeman, Netherlands coach