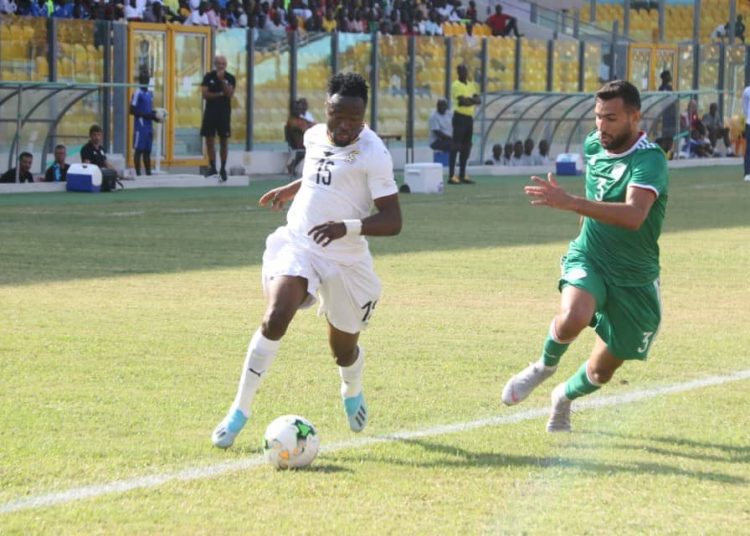 Ghana’s U-23 team, the Black Meteors, were held to a 1-1 draw by their Algerian counterparts in the first leg of their 2019 CAF U-23 AFCON last round qualifier at the Accra Sports Stadium.

Algeria took the lead in the first half through Dorgane Adam before Dauda Mohammed scored a second half penalty to draw Ghana level.

Algeria started the better side, more organized and more purposeful, taking advantage of a lack of recognized defensive midfielder in the Ghana set up to counter with ease.

They almost took the lead as early as the 3rd minute when lapse in concentration left Algeria striker Benchaa Zakaria in acres of space but with only Kwame Baah to beat in the Ghana goal, he shot tamely at the Kotoko goalkeeper.

But the Algerians were not to be denied for long and just over the half hour mark, after Gideon Mensah fail to close down his marker, the ball fell to Dorgane Adam who fired past Baah this time.

It was a goal the Algerians had deserved against a Ghana side that had struggled to string passes together in their build up.

On 38 minutes, Ghana were awarded a penalty albeit a controversially after Joseph Painstil went down in the box.

Captain Yaw Yeboah blasted the spot kick over the bar.

Left back, Gideon Mensah, then hit the upright with a low drive from the edge of the box but the Algerians went into the break with the advantage.

Head coach, Ibrahim Tanko, brought on Joel Fameyeh for Joseph Painstil and took out Bernard Tekpetey for Isaac Twum at the start of the second half as Ghana went for broke.

Just over the hour mark, Yaw Yeboah won a spot kick after showing great feet in the box. Dauda Mohammed stepped up and buried the penalty. Ghana were level. 1-1.

As the Ghanaians pushed men forward in search of a winner, Algeria found space on the counter and it took another point blank save from Kwame Baah to keep the score level.

That was the last significant piece of action as the referee brought proceedings to an end.

It was a disappointing result that wasn’t exactly surprising considering head coach Ibrahim Tanko only had the full complement of his squad on Wednesday night, just 48 hours to the game.

It was the consequence of a bizarre decision by the Sports Ministry not purchase air tickets for the foreign-based players who had to fly themselves home for the crucial tie.

Ghana will now head to Setif in Algeria where they will hope to beat the hosts to the ticket to the CAF U-23 AFCON in Egypt where a ticket for Tokyo 2020 Olympics will be up for grabs for the top 3 teams from that tournament.