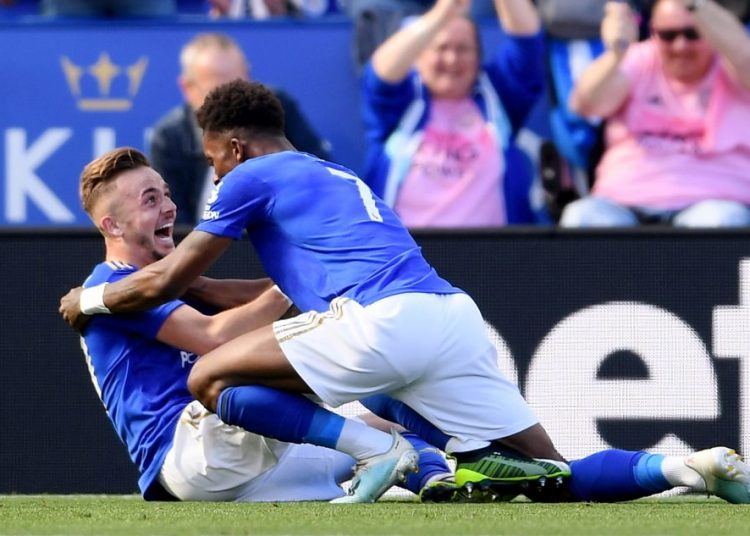 Tottenham’s wait for an away Premier League win goes on as Leicester came from behind to beat Spurs 2-1 on Saturday afternoon.

A drama-filled match, which saw two goals ruled out after VAR reviews, was won by a magnificent James Maddison strike netted five minutes from full-time.

He fired the Foxes to three points with his first goal of the season, after Ricardo Pereira had earlier cancelled out Harry Kane’s first-half opener.

Both teams had a goal disallowed after VAR intervened, with Pereira equalising for Leicester just moments after Serge Aurier thought he had fired Spurs two goals ahead, only for the strike to be ruled out as Heung-min Son was narrowly offside in the build-up.

Spurs are still looking for their first Premier League away win since January and missed the chance to close the gap to Premier League leaders Liverpool.

Leicester continued their impressive form to move into second before the later matches.

Maddison gave a sign of things to come after 15 minutes when he forced Paulo Gazzaniga – starting with Hugo Lloris missing after his wife gave birth – into his first save.

The midfielder danced past Jan Vertonghen and Toby Alderweireld only for his low near-post effort to be turned behind.

It was the first scare for Spurs and they survived another thanks to VAR after 17 minutes.

Gazzaniga spilled Youri Tielemans’ drive and, after Ayoze Perez mis-kicked, Ndidi bundled in from close range – only for VAR to rule the goal out with the pair offside.

The decision was correct but it ramped up the atmosphere of an intense game which continued to entertain after Kane’s invention on 29 minutes.

The England skipper latched onto Son’s back-heel but was clipped by Caglar Soyuncu and stumbled into the area.

He hit the deck but somehow managed to hook his foot and steer the ball past Kasper Schmeichel from six yards.

It was his 13th goal in 14 games against Leicester and was no fluke, the striker knew exactly what he was doing in an example of brilliant quick thinking.

Perez forced Gazzaniga into a smart near-post save seven minutes before half-time as Leicester tried to hit back.

They continued to press after the break and Gazzaniga turned Jamie Vardy’s angled effort away as the striker threatened to escape Vertonghen.

But Son blew a great chance to double Spurs’ lead after 58 minutes.

Erik Lamela and Harry Winks hit Leicester on the break and found Son but, with Schmeichel to beat, he dragged across goal from an angle.

The tempo was unrelenting and Tottenham were left fuming when Aurier’s goal was disallowed by the smallest of margins after 64 minutes.

The right-back’s superb drilled finish from Kane’s pass looked to have put the visitors 2-0 up but VAR ruled – after two minutes of deliberation – Son was millimetres offside in the build-up.

It was another controversial decision but Leicester made the most of the reprieve by levelling five minutes later.

Vardy was slipped in on the left and his deflected cross ran for Pereira to fire in from close range.

Leicester had the momentum and after Kane tested Schmeichel, the Foxes won it with five minutes remaining.

Hamza Choudhury laid the ball off to Maddison to drive forward and bury a low strike into the bottom corner from 25 yards.