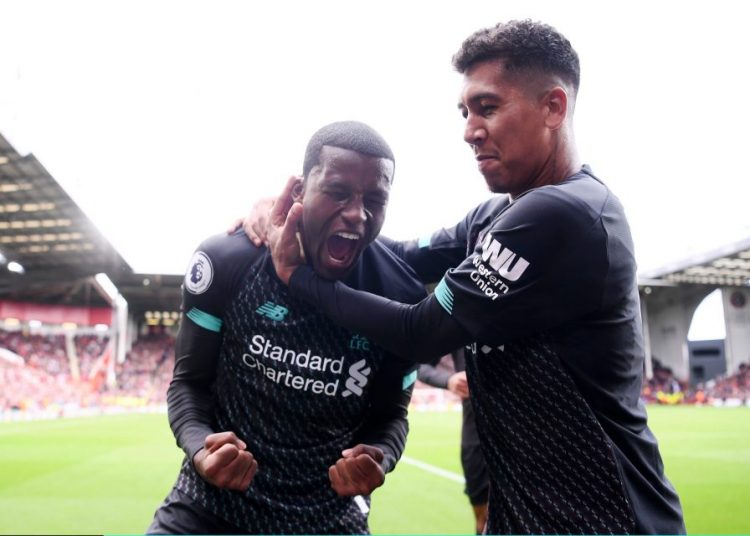 Sheffield United goalkeeper Dean Henderson made a costly mistake to gift Liverpool a 1-0 victory over the Blades at Bramall Lane.

The Reds continued their perfect start to the Premier League season with their 16th consecutive league win after Georginio Wijnaldum’s tame volley squirmed through the legs of Henderson with 20 minutes remaining.

Until then, Liverpool’s extraordinary run looked set to end as the visitors struggled to break down Chris Wilder’s well-organized side.

Sadio Mane was unusually wasteful in front of goal, spurning two golden opportunities in the first half, while the Blades carried their own threat against a Liverpool team who looked uncharacteristically vulnerable.

Nonetheless, the Reds got that little bit of luck to extend their lead at the top of the league to eight points ahead of Manchester City’s trip to Everton this evening.

United was so concentrated on maintaining an organized front in the face of their opponent’s domination of possession they were almost surprised when chances came their way with Callum Robinson snatching a shot wide after being put through by John Fleck.

Liverpool toiled in the middle third, moving the ball one way and then recycling it back the other as they probed to make a breakthrough with half-chances missed by Wijnaldum, Mohamed Salah, and Andy Robertson.

The direct approach proved more profitable as Virgil Van Dijk lofted a pass for Mane to run clear of the defence but he sliced high and wide with only goalkeeper Henderson to beat.

Mane should have done better with that effort but the one-two minutes before the break was even more inexplicable.

Wijnaldum launched Salah on the counter-attack which resulted in Firmino, seven yards out, opting to tee up Mane but although his shot beat Henderson at his near post the upright denied him a goal.

Liverpool’s seven first-half shots were the most they had produced in the opening 45 minutes of a league match without one being on target since February 2017, when they lost to Hull.

After more labouring without intent in the opening 20 minutes of the second half, Klopp changed tack, sending on the fit-again Divock Origi for Jordan Henderson and switching to a 4-2-3-1 formation with Salah as its spearhead.

The best chances were still falling to the hosts, however, with Norwood forcing to tip a low drive around the same post Mane had struck until Liverpool benefited from a huge stroke of luck.

Just when it seemed United were about to become only the only side after Barcelona and Napoli in the last 26 games to prevent the Reds scoring, Henderson blew it.

Wijnaldum’s shot from the edge of the area was hit well but more in hope than expectation but, as it flew through a crowd of players, United’s goalkeeper failed to get a proper hold and it slipped between his hands and then his legs to trickle over the line.

Henderson’s sticking out a leg to deny Salah clean through one-on-one prevented it from becoming 2-0 but the damage had been done.

Liverpool’s bandwagon rolls on, briefly extending their lead over Manchester City to eight, having taken an incredible 121 points from a last possible 138.