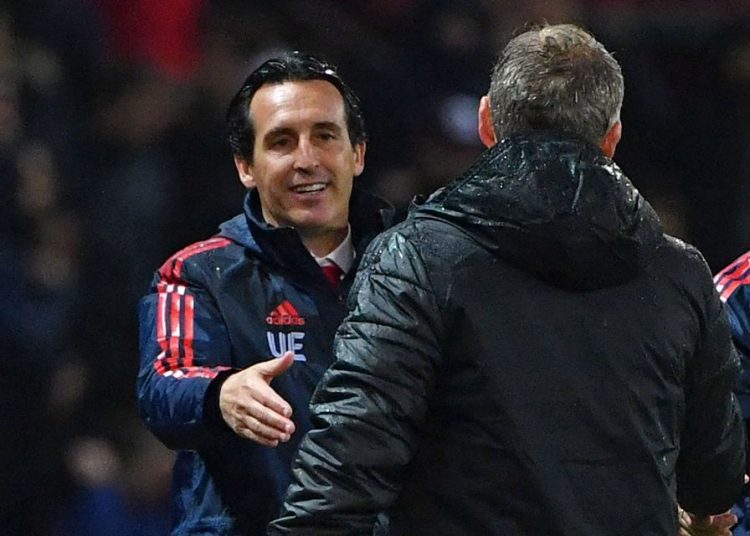 VAR came to Arsenal’s rescue as they earned a 1-1 draw with Manchester United at Old Trafford.

Pierre-Emerick Aubameyang’s equalizer was allowed to stand after VAR overruled an incorrect offside call, as the old foes played out an entertaining tie.

The game sparked into life when Scott McTominay opened the scoring for the hosts just before half-time with a stunning effort from the edge of the box.

But the Gunners emerged the stronger side after the break and the breakthrough came courtesy of an error from Red Devils left-back Axel Tuanzebe.

The 21-year-old gifted the ball to Bukayo Saka, whose quick through-ball allowed Aubameyang to produce a clever dink over David de Gea.

The goal was initially ruled out, but replays showed Harry Maguire was clearly playing the striker onside, and VAR showed its positive qualities following a weekend of controversial headlines.

Driving rain admittedly made conditions difficult but passes were misplaced, crosses over-hit and free-kicks lofted straight out of play.

Daniel James used his pace to cause a couple of moments of danger, and a pullback on the young winger earned Calum Chambers a booking inside 10 minutes.

It took 29 minutes for the first shot and the first really incisive bit of play, with the ball breaking in midfield for Andreas Pereira, who drove at the Arsenal defence and broke into the area before seeing his shot saved by Bernd Leno.

That sparked a bright spell for Arsenal, with Nicolas Pepe shooting over before the Gunners had a good chance to threaten when Pereira picked up a caution for a foul on Matteo Guendouzi only for Granit Xhaka to produce a baffling free-kick that Chambers put behind.

David De Gea made his first save from Pepe at the back post, while Pogba finally found Rashford with a fine through ball only for a combination of a slip from the striker and good tracking from Sokratis to thwart the danger.

Water was bouncing off the sodden turf and a slip from Pereira in the 44th minute let in young Bukayo Saka down the left. His shot across goal was parried by De Gea, who got up well to block the follow-up from Guendouzi.

That became even more important moments later as United broke away down the other end. The chance looked to have gone when James over-hit his cross for Rashford but the striker picked out McTominay 22 yards out and he found the top of the net via the slightest deflection off Sokratis.

After being jeered by his own fans last week, Xhaka’s duck of the head as the shot flew towards him will have done nothing to endear the captain to the Gunners faithful.

United wanted a penalty early in the second half for a handball by Sead Kolasinac, but referee Kevin Friend turned down the appeals and it was not deemed enough of a mistake for the decision to be overturned.

However, one replay was all it took to show that assistant Scott Ledger had erroneously raised his flag against Aubameyang after Tuanzebe’s awful pass had allowed Saka to play in the striker, who neatly chipped De Gea.

The visitors nearly had a second immediately but the impressive Saka, 18, was denied by a goal-saving block by Victor Lindelof.

United sought a response and Pogba curled a shot just wide before McTominay planted a free header over the bar when he should have scored.

Leno was then called upon to push a strong shot from Maguire over, and the keeper saved his best for last with a diving stop to keep out Rashford’s late free-kick.