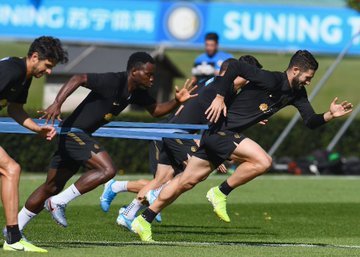 Ghana’s Kwadwo Asamoah and his Inter Milan team mates have been sharpening their fitness ahead of Wednesday’s important UEFA Champions League against Spanish giants, Barcelona at the Nou Camp.

Inter Milan and the three other teams in Group F failed to win their opening fixtures after they were involved in draws: Inter drew 1-1 with Slavia Prague in Italy while Barcelona and Dortmund drew goalless in Germany.

For Asamoah, should he feature at the Camp Nou, it will be his second straight appearance for Inter Milan in the competition this season and he and his team mates are working hard ahead of the tie.

He shared some pictures on his Twitter handle on Monday of some of the training sessions Inter Milan players were working in for the Barcelona tie.

He captioned the post: “Getting ready for the game of Wednesday.”

Getting ready for the game of Wednesday ⚫️🔵🔜 @ChampionsLeague #Training #Team @Inter pic.twitter.com/cWhaW4wiaY

Asamoah has featured for Inter Milan 6 times across all competitions this season.